Hello, February, or is this May? Where is winter?

Yesterday’s temperature here was 74 degrees! How nice for everyone who visited the zoo, local parks or just got out for a walk but yikes, how will our orchard react to this spike in temperatures? Our blueberry plants require a certain number of days below freezing for good production which is now concerning when the climate is so topsy turvy but more worrisome than that, we do not want to trick all the fruit trees into thinking it is time to bud out. Yikes! Indicative of that, the bees are out and about looking for food and there are reports from other local beekeepers that they are already bringing in pollen in our area which is at least 6 weeks ahead of schedule. If only this was exciting news but I fear it could backfire.

I got this tidbit of bee info after spending all of yesterday (from 8am til 5pm) at a local beekeeping seminar with presenters from the University of Guelph in Ontario, Canada. (No, that is not a typo, but just try pronouncing that fun word!) It was interesting to hear the Canadian beekeepers describe their scientific experiments (which included isolating bee colonies on two islands for genetic breeding purposes) but it didn’t really relate as much to our experiences here since they are not only in a dramatically different weather climate but also adhere to vastly different government rules and regulations that determine which pesticides/herbicides can be used in their agriculture AND what treatments they are allowed to use on their bees for the current diseases affecting the bee population.

The state of our US bees (diseases, fungi, and other colony collapse issues) is such that although Canadians welcome refugees from all over the world, (YAY CANADA!) they long ago closed their borders on the importation of our bees so the only kind that cross their border are the ones that fly  across! Despite my whining, I’m fortunate to get some real-time, continuing beekeeping education and look forward to the coming season when we hope to expand our bee yard.

I can’t tell you how many people try to console us with the idea that this must be the time of year when we take a vacation from the farm. The limited number of daylight hours somewhat restricts our outdoor activities, and yet we are still pretty busy here. Besides the ongoing maintenance of equipment and grounds, our two major winter initiatives have been building the retaining wall on the north side of the barn for the new gravel access road and preparing for the expansion of the deer fencing along the north and south property lines.

Fencing: In order to replace the existing 903 foot expanse of North/South fencing with new deer fencing, we have been clearing the existing fence line of 30 plus years of overgrowth. Dave has been working on this tirelessly and I join in when I can but as you can see, it is tedious at best. 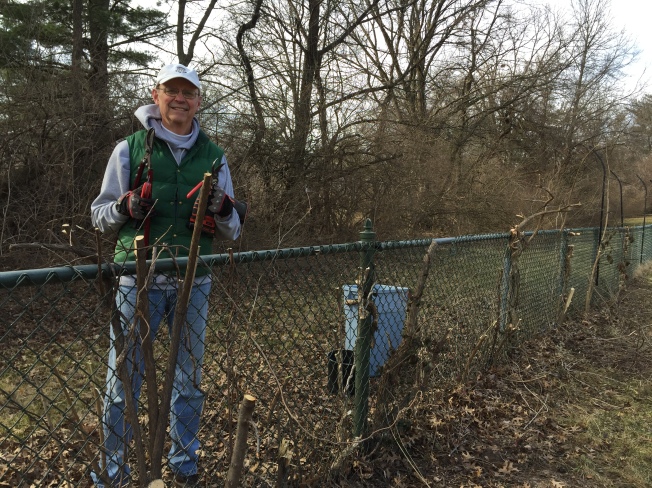 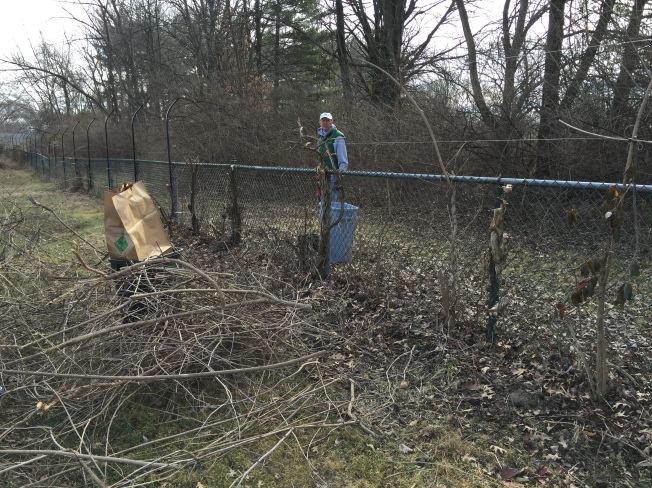 Here is an example of the stubborn over growth entwined in the fence after we chopped away as best we could. We are carting away piles and piles of debris from this project.

Walls: The wall we are building is on the north side of the access road next to the barn. Our friend, Jon Lanaghan wears so many hats in our lives as he is our talented arborist but also knows enough about masonry to help us build this stone retaining wall.  Here he is recently getting the base of the wall established, moving about 4 tons of rock in one day.

From what looked like a huge rock pile, he created a baseline for a wall! 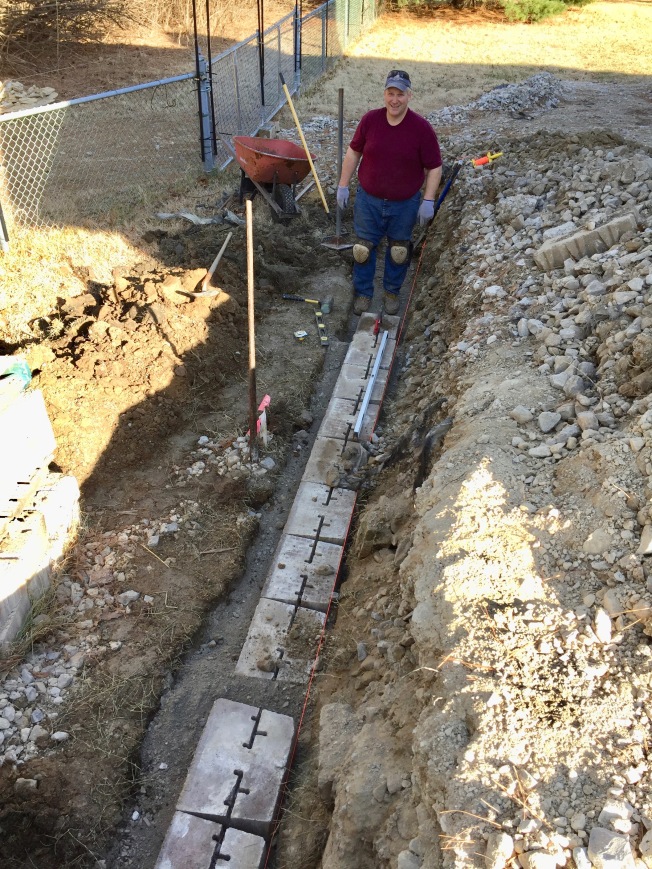 And demonstrated how these 82 pound blocks could be hefted from one spot to another with relative ease using the proper tools.

While all this fencing and wall building is taking place, I can tell you that the chickens have been hard at work as well. We have now experienced a “Full House” meaning that each hen laid one egg in a single day providing the 17 colorful eggs you see below. (Hens will normally lay one egg every 26-30 hours so given that cycle, you cannot expect an egg each day per hen for any longer than a two week span at most.) Here is what the excitement of that looks like…and we had this TRIFECTA twice in the first week of February, so what do I know? Best of all is the ceramic tile of our prep kitchen back splash in the background of the photo, illustrating wee chicks flapping about!

We are now selling eggs both at The Artery and to friends and neighbors alike. Subscriptions are now available on a limited, first come, first serve basis so that we can consistently provide to those who are interested.

Besides being so prolific in the egg department, I find our hens to be artistic as well…here is the impression they left for me this morning as a wing span imprint in the inevitable dust of the nest box lid in the coop…it is almost archeological in nature…or something one might see on an ancient wall in a cave in France?

Cooking with eggs is a current passion of mine and I’m finding some recipes to be regional favorites such as one called Shakshuka. Despite being a wonderfully fun word to say, it is not the sound that you make when you sneeze, but rather a dish of North African origin that is often associated with Israeli cooking. It is another example of incorporating eggs into the lunch or dinner menu. I found various versions of this simple dish and followed one from Molly on the Range despite finding similar ones from favorite sources  Yottam and Smitten Kitchen.

Each version brings me inspiration in that I find alternative ingredients that basically sends the message that one should make a veggie ‘stew’ that simmers on the stove top to which one adds freshly cracked eggs that then simmer in the sauce until baked. No matter which veggies ones uses, the outcome is a flexible feast that uses what one has on hand along with some middle eastern (yet common) spices, topped by the cracking of some eggs; something that nearly defines me as I stand at my stove these days.

So, the easiest way to share this is to link the New York Times recipe so as not to violate copy writes of the recipes from Molly’s or Yottam’s books. Yes, they vary in interesting ways…Molly adds Israeli couscous which we loved for the added oomph at dinner time.

Nearly all versions start out with sauteing onions and adding spices before the addition of the other veggies and stewing a bit on the stove top. Here is my version after adding the couscous which has been fragrantly simmering and was ready for the eggs. 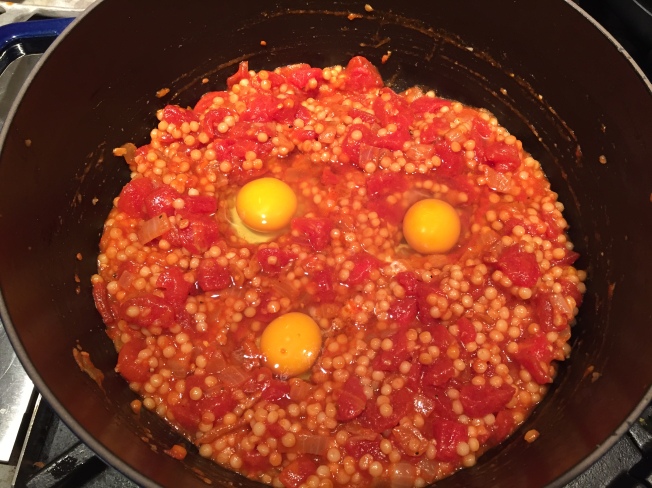 Not all recipes add feta, but OMG, what a favorite of my mine…how can you lose…so here it is with a bit of feta and parsley. The eggs simmer in the sauce and become amazing bits for each plate after a round of time in the oven! I shared a skillet of this with the Wards with good reviews. Shakshuka, gazoontite! 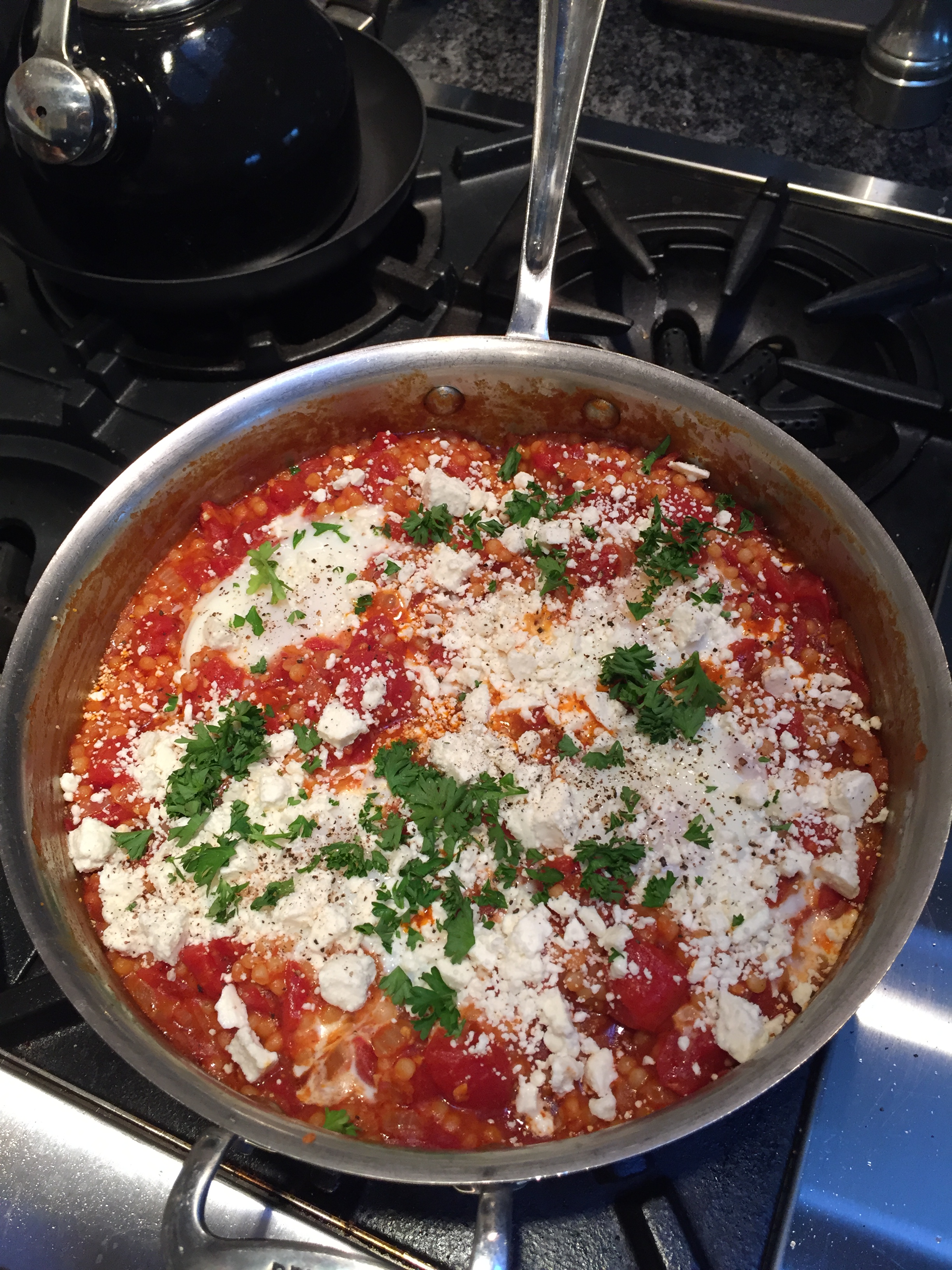 I also experimented with a simple combo of eggs/cheese/ham that I shared with the Wards recently which they now call “Eggie Yum Yum”. This general recipe can be found on line here and is so simple to adopt using other ingredients you might have on hand. I started out with ramekins lined with Canadian bacon… 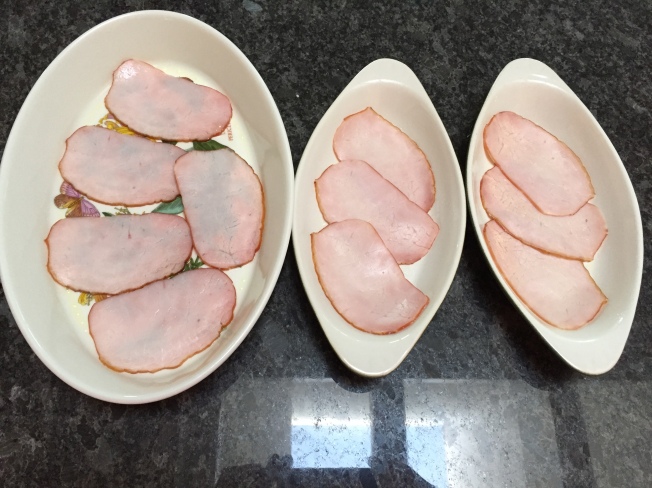 Added the sauteed onion and spinach…

Then the eggs on top followed by some of the cheese… 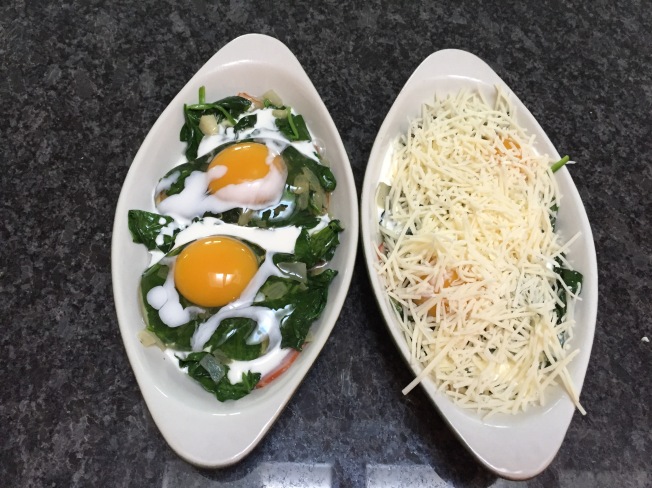 Then cooked for several minutes and viola! 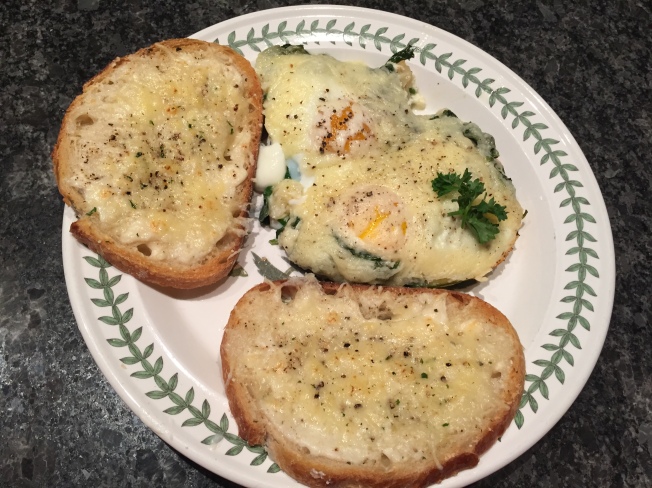 Little Coulter is happily enjoying all that spring has to offer. We don’t want to take advantage of his good nature when it comes to helping out on the farm, but he seems to think that collecting gum balls is a bit of fun…we won’t break his bubble on this just yet! (The scraping sound is Dave’s rake on the asphalt!)

We also took him to the recent members’ day opening of the Daniel Tiger’s Neighborhood exhibit at the local Magic House and I’m afraid we miss judged the crowd size and he was one among hundreds of little ones trying to get a handshake with the Neighborhood friends and it was pretty intimidating…for him and for us! Ugga mugga! 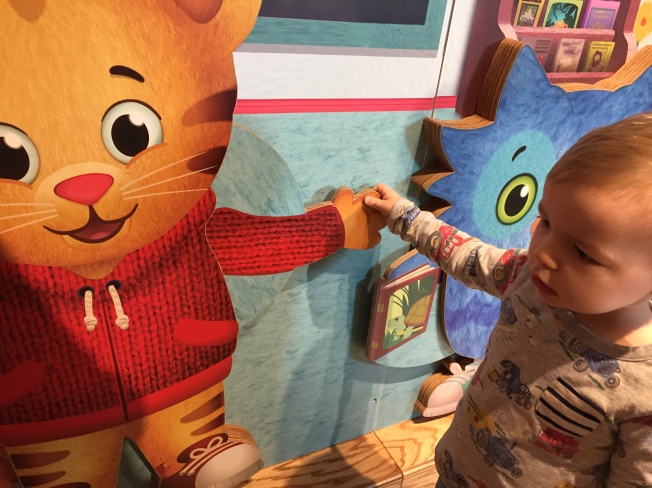 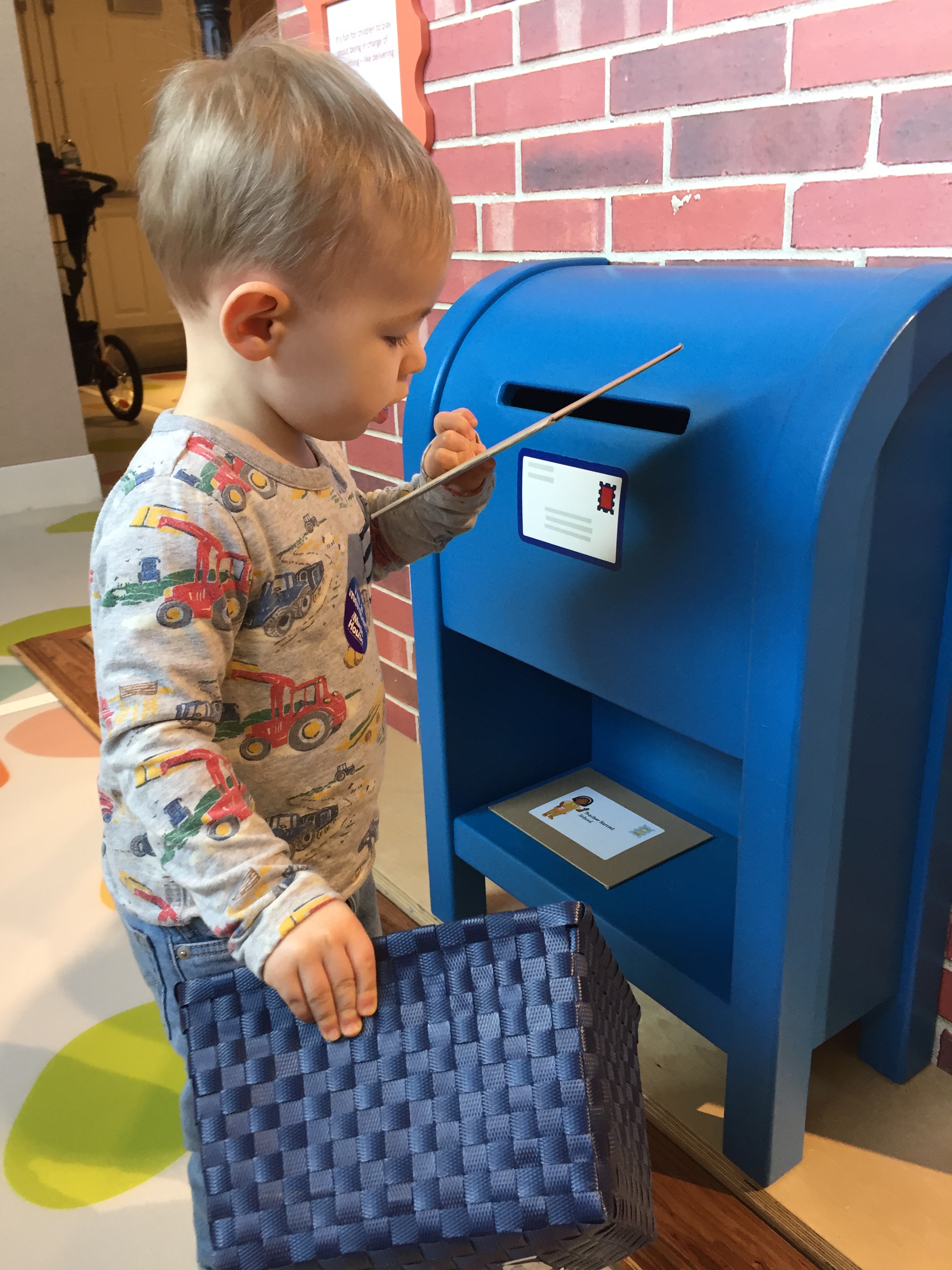