We had so much fun today! We hosted the Limestone College (South Carolina) women’s field hockey team at the farm for lunch. My second cousin, Lindsay Jackson, (her grandmother, was my dad’s sister, Peg) is the head coach of this team which she basically started from the ground up about five years ago. They are in town for the 2013 Eastern College Athletic Conference (ECAC) Division II Field Hockey Invitational which is being held at Lindenwood University. Lindsay is an inspiring coach (what a spitfire personality) who has put this team on the map in recent years and has created a rising presence in the field hockey arena. They are currently ranked #9 in the national polls for Div. II collegiate field hockey and have their sights on making waves in the future. Watch out! We hope to get to see them win the championship tomorrow. http://golimestonesaints.com/schedule.aspx?path=fh&schedule=306

We had a drop dead, gorgeous, fall day for this event. The sun was shining brightly with a clear blue sky as the background for the autumn reds and yellows of the remaining tree leaves. Their bus arrived at noon and we were prepared for the team to dig into our lunch fare offerings.

We had three kinds of soup simmering on the stove, salads, sandwich fixings, fruits, snacks and cookies waiting for them. Thanks to Kathy Bussmann for loaning me extra soup ladles at the last minute!

The noontime temps were in the mid 60s which allowed the group to sit on the terrace and enjoy the day. 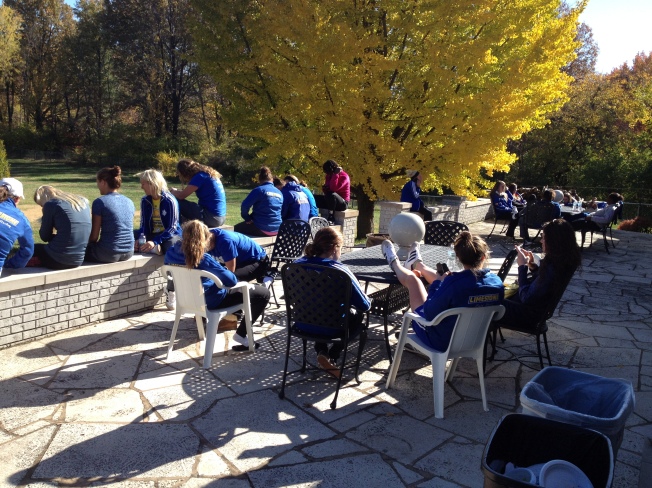 Farley, as usual, was a big hit with the group and managed to behave himself. Some of the team enjoyed driving the golf cart around and took a tour of the fields. When they picked a nice turnip and large carrot from the field, we promptly washed and sliced them for a raw mini tasting which was also a big hit. What a fun group to get to host!

Wouldn’t you know, this was the same day that our arborist, Jon, arrived to start cutting away the old and decaying river birches from the front islands. He, too, had a gorgeous day to work and made pretty good progress. Although it is sad to see these trees go, they were on their last legs and at various stages of dying.

The last three years of drought have not helped them either. Jon started on the south side and worked his way over to the north end of the tree islands. He has two more to take out and then will have to work on removing the stumps and the ground cover before planting the newly dug Trident Maples. We hope to see him back tomorrow and the next couple of weeks to work on this. 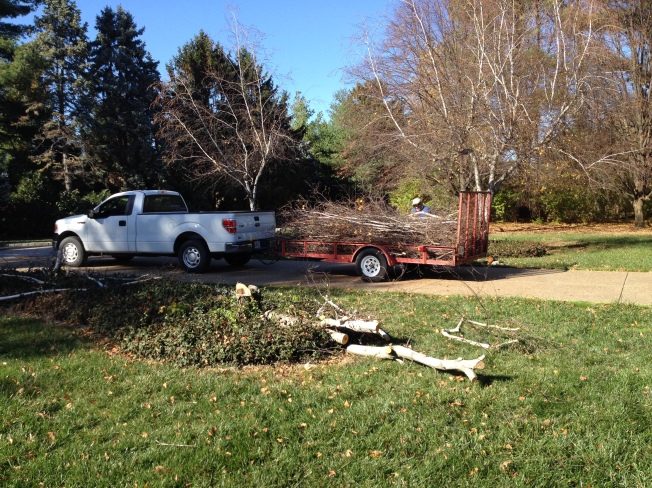 We are also expecting the installation of the new driveway gate and fencing this week. The weather is predicted to be quite cold so we may have to bring in the last of the fall harvest but we hope the tree and fence work will not be affected by the temps. In the meantime, Dave has continued to work on clearing the fields in anticipation of tilling them and putting them to bed for the winter. More on this progress soon.

Limestone field hockey was not the only family related team playing for the money this week. Our daughter, Kate, had a fabulous, season ending, championship win with her 8th grade girls volleyball team last week. They play for Saint Matthew’s Parish in Pacific Palisades, CA where she also teaches biology and earth science to eager minds. Yeah!

One thought on “A Visit From Limestone College Field Hockey”