There has not been a lot of farming news to report. We continue to get plenty of fall veggies that have been resilient to the frosts we have had. We have been enjoying turnips, carrots, kale, swiss chard, spinach, bok choi and several lettuces. We are hoping to harvest broccoli and cabbage yet but they have not quite developed enough at this point. We have had some nice, light rain the last few days which has kept us from turning under the spent fields. We would like to do this sooner rather than later in order to put those fields to bed for the winter before it gets too wet to work the soil. In the meantime, Dave was able to clean up and remove the trellises for the cucumbers yesterday and put them away to re-use next year.

Although the driveway project is finished, we are now trying to make the repairs to the landscaping that was compromised in the construction process. We got some help from our arborist, Jon Lanaghan, who is helping to prepare the future beds next to the terrace walls. We will plant beautiful crepe myrtles in these next spring.

My sister, Julia who lives in Colorado, serves as the unofficial but steadfast family historian and has a passion for our ancestry. I am always impressed with what she comes up with but I was really excited to see this photo which she shared with us recently. It is of my great-great-grandfather (on my father’s side), Carl Bertz who was born in Darmstadt Germany in 1832 and after emigrating to America, he was, among other things,  a vegetable vendor in Illinois. This photo shows him with a cart full of produce! What an interesting connection I feel with him!

I should also mention that on the Sauerhoff side, Dave’s grandfather, John Emerson Sauerhoff, Sr., sold the basketry that fruits and vegetables were packed in. He had a territory and traveled the Eastern Shore of Maryland supplying these goods.

I would also like to recommend an interesting article we read in last weekend’s New York Times Magazine. Very interesting food for thought, hee, hee, hee! Here is the link, I hope you all will read it with as much interest as we did. If you cannot access the link (I’m still learning how to get this right in the blog-o-sphere) e-mail me and I will share it.

We have tried some new recipes lately. One nice one from the Hetenyis that uses 4 heads of baby bok choi! Perfect for us and tasty too. Here is the link which I found in the Willams Sonoma recipe collection.  http://www.williams-sonoma.com/recipe/wok-seared-baby-bok-choy-with-chili-oil-and-garlic.html?cm_src=RECIPESEARCH

The other recipe that I tried yesterday was also found in last weekend’s NYTimes magazine. It was a Korean short rib stew that used some unusual ingredients. I had never cooked with jarred chestnuts nor Taro before. I had fun making this and it was tasty although beef short ribs are not exactly a low fat ingredient. It made enough to last for some time and I can see using the basis of this recipe along with some variation of the ingredients in the future.

Lastly, while Dave was in Connecticut last weekend, I had some time to knit. This is a sweater I started some time ago and thought I would quickly finish it up before I get going on the newest one. It is hard to take a good picture while modeling the item. This is an example of a Fair Isle style of ‘jumper’ that is knitted from the bottom up in one round tube and then the armholes and neck line are cut open and then sleeves and collar are all picked up stitches from those edges and knitted in the opposite direction. Oh what a lot of work is involved in this one where there are 15 colors of yarn with one of those colors changing just about every row. One sleeve is nearly completed. I will look forward to modeling the completed sweater! 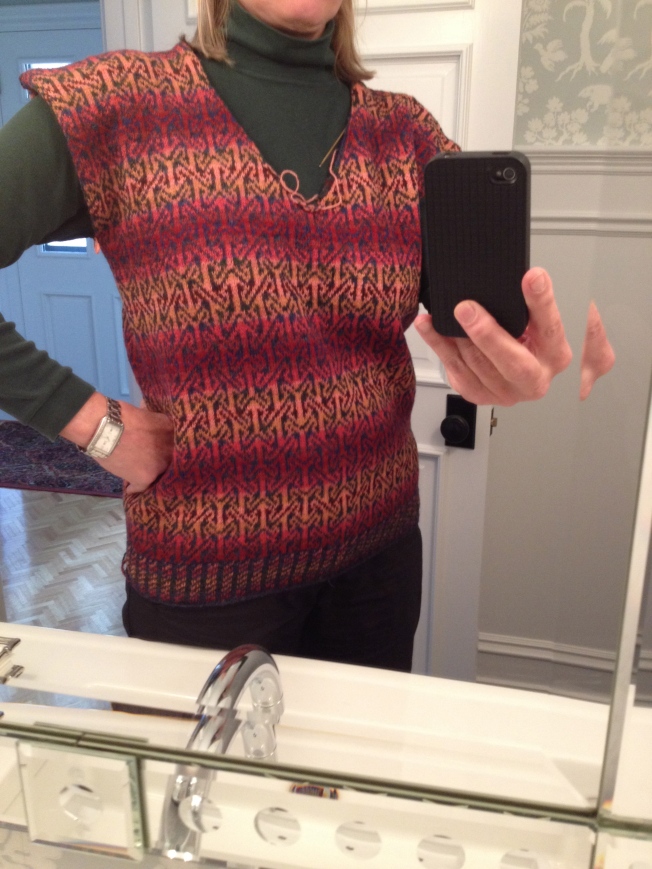