Last week was a busy one. The heat is on and no rain so we were busy with watering and this week looks like much of the same. I’m afraid the heat we are getting may be too late for the tomato crop to benefit but it should help to ripen up some melons.

Dave drove to Philly for a brief visit with Peter and took him this box of jarred goodies which included three types of pickles, ketchup, sriracha, pasta sauce and relish.

In his two day absence, I was in charge of the farm. When he is gone, I miss him and so does Farley and the farm actually suffers. I just cannot do nearly as much as he does on a daily basis. Case in point, it is 7pm on a very hot day and he is still out doing the harvesting and moving hoses. Granted, I have my day job, but lets face it, I had all of Saturday to make an impact and I have very little to show for it!

Okay, I got a bit distracted on Saturday…I did have a ton of fun with friends who joined me here for a brunch at the farm on Saturday, to celebrate our friend, Kathy Bussmann’s, birthday. What a great time, if I don’t say so myself! There were only six of us but everyone brought something wonderful to eat and we had a grand time catching up on news and reviewing silly stories of the past episodes of our gatherings. We laughed until we cried and it was great therapy!

So that was my Saturday adventure. After the party, I went directly back to kitchen and farm duties. Knowing that Dave was arriving home mid morning on Sunday, I tried to make up for the harvesting that I was supposed to have been doing in his absence. I was thrilled to be using a special basket or ‘trug’ that my friend Linda Peace brought as a hostess gift to the party yesterday. Very clever, it is washable! Here it is as it was sweetly presented.

Here it is with the morning harvest. Thank you, Linda! 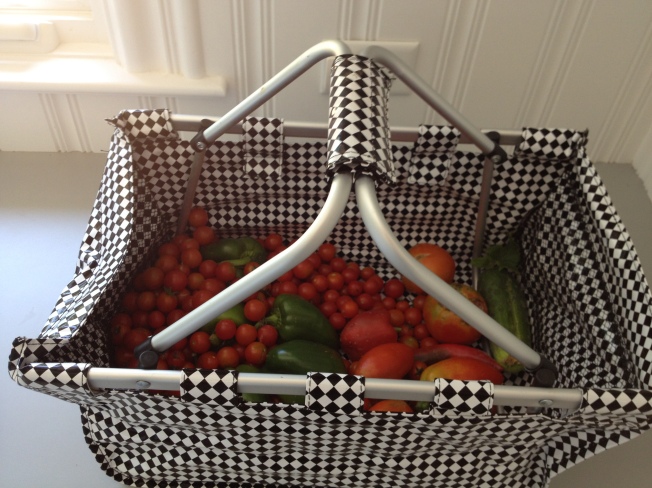 In the meantime, I roasted 6 more eggplants with countless cherry tomatoes, onions and peppers and froze two more batches for the winter.

I also made another batch of Sriracha sauce. This time I took some of the pepper seeds out of the mix to make it a bit less hot. I got 4 half pints this time around and have another pound of red peppers in the fridge waiting for the next batch. The tedious part of the recipe is peeling 1.25 cups of fresh garlic cloves. After the jars were cooled and I was done for the day, I realized I made a horrible mistake when preparing the peppers.

Many recipes recommend using rubber gloves when handling hot peppers. I have been careful in the past but never had a problem until yesterday when I realized that the palms of my hands were on fire. Ugh! I had scrubbed these red peppers aggressively with my bare hands where as in the past I had just rinsed them under water. Or maybe it was handling the seeds? I didn’t have any reaction at the time I was cutting, and I do know not to put my hands to my face while working. My hands were in and out of the water all afternoon with cleaning up my mess so it wasn’t until dinner time that the impact was starting to be felt. I don’t think there is anything I can do now but wait for the pain to subside. It meant I had a sleepless night of burning palms but they are getting a bit better now. How stupid was that?

Big news…we picked the first of the water melons yesterday. 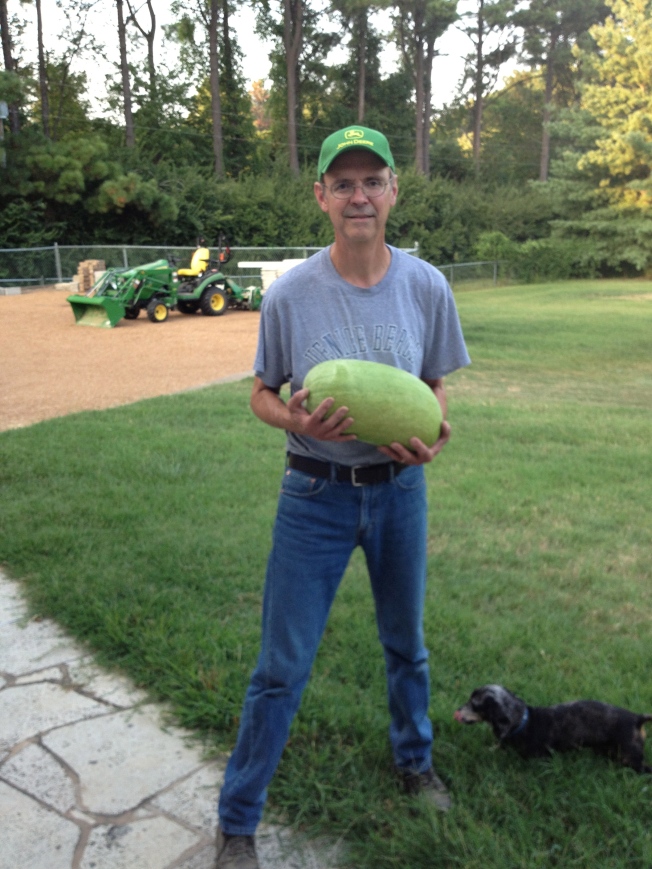 It tipped the scale at 13 pounds of beauty!

We popped it into the fridge in order to get it good and cold before cutting!

Here was today’s harvest which included the first cantaloupe as well as a lovely green bean harvest!

In other Farm news, we were at nearly 900 lbs of produce after yesterday’s harvest and I’m sure that will multiply quickly as soon as the melons come in. I was very pleased to have shared some eggplants with multiple willing friends this week: both Jill Stoll and Nancy Hinkson were willing takers! I hope they had success in their use for these items!

One thought on “The Melons Have Arrived!”