Well, it’s suddenly berry season here at the farm and we have hit the ground running with nearly 82 pounds of strawberries harvested already after only the first week of picking duties.

Sheesh! I am still sporting my happy face that I wear around here every year for at least the first week of each berry season but we are currently faced with days of high heat for this time of year (94 degrees today) so picking can be a bit more exhausting than it usually is at this juncture. But my exhaustion isn’t the sole problem here.

What really matters is that the strawberries are ripening faster than normal in this heat and are a bit more fragile as well since their cell walls have expanded rapidly and are a bit thinner than normal. The window of time for picking is also shorter since one normally waits for the dew to dry before beginning to harvest…(I love the droplets on the tips of the berry leaves.) 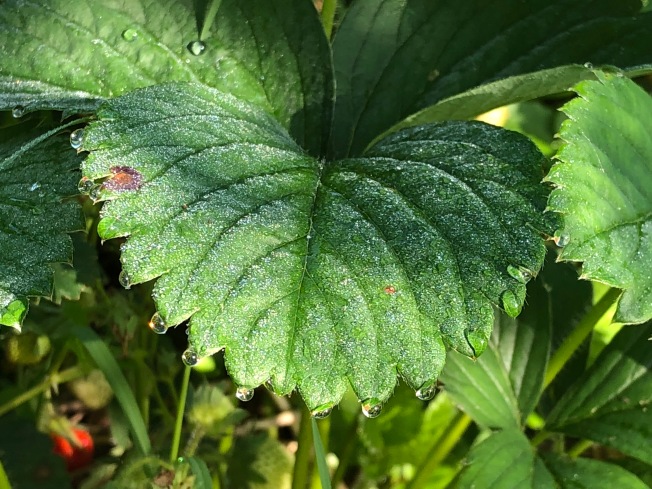 But one should pick in the cool of the morning, as the sugar is still rising in the plant and out to the fruit before the heat threatens and sends the sugars back to the base of the plant. So the heat we are currently experiencing means that the ideal window to harvest is shorter. With the unexpected 4 hours needed to pick the patch yesterday, I was actually picking fruit that was beginning to feel warm to the touch and although I know it to be a no-no, there was no other choice but to continue on as these ripe berries would be overly ripe by the following day. Rain overnight meant that I made the right choice since I would have had a patch of soggy, untenable fruit today if I had waited!

Of course it doesn’t help that I am sometimes distracted by the wonders of the insect world and take out my phone to photograph whatever crosses my path. Here is a mother spider who was a bit startled by my presence and picked up her egg sack and tried to quickly get out of my way and protect her future offspring. Can you see her despite the camouflage of the mulch? She scampered off in short fits of movement. I very much approve of spiders in my berry patch since I know they eat other insects.

I’m not quite so fond of the moth world of insects since one of the previous stages of caterpillar can be so devastating but this shapely fellow caught my eye as well.

So, in my defense, I harvested 20 pounds of strawberries the previous day and over 32 pounds yesterday so I cannot say the patch was at all neglected. The good news was that yesterday was the first Saturday we were able to offer strawberries to our CSA customers and we sold all 25 pints that we had to offer from Friday’s harvest. We also had several varieties of Spinaches and Lettuces with much more to come! It was fun to also offer a mini tour of the berry patch to the group so that they could see just where their goodies were originating and hopefully could calculate the value of their purchases when the effort we put into this was on display.

Despite all our sales yesterday, the week of harvesting meant that the refrigerators were chocked full of berries today and I was on notice to do some preserving one way or another.

Each pan you see weighs approximately 4 pounds and the slip of white paper floating on top tells me the date it was harvested. So this morning, I started making strawberry jam which is very popular with our customers as well as all family members. Although it is time consuming to wash, hull and quarter the berries and put them into large pots in specified quantities, I have a system after all these years and usually start two batches at once. These stock pots each have 3.75lbs of berries that have been prepared and then smashed with the potato masher to break them up a bit more. The pot on the right still shows the white of the pectin that has not yet dissolved. 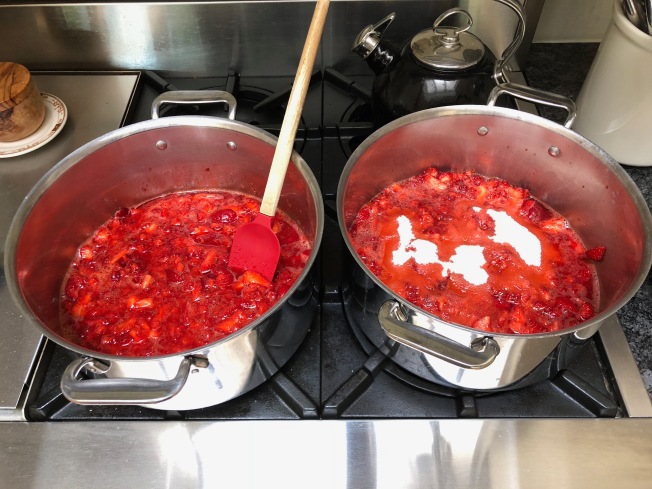 Then the mash is heated to an initial boil after which I add the sugar. Once the prescribed sugar is added, this mass comes to another boil which I carefully time for exactly one minute of ‘roiling boil stage’ – a term which means that no amount of stirring can calm the hot sticky mess that can burn one’s hands if not careful!  (You might espy, my bandaged hand from a previous burn!) Gah!

After the final boil, the mixture is quickly added to the waiting sterilized jars using a funnel and careful handling – again, boiling sticky mess! The rims of each jar are then wiped clean with a hot cloth to remove any remainders. 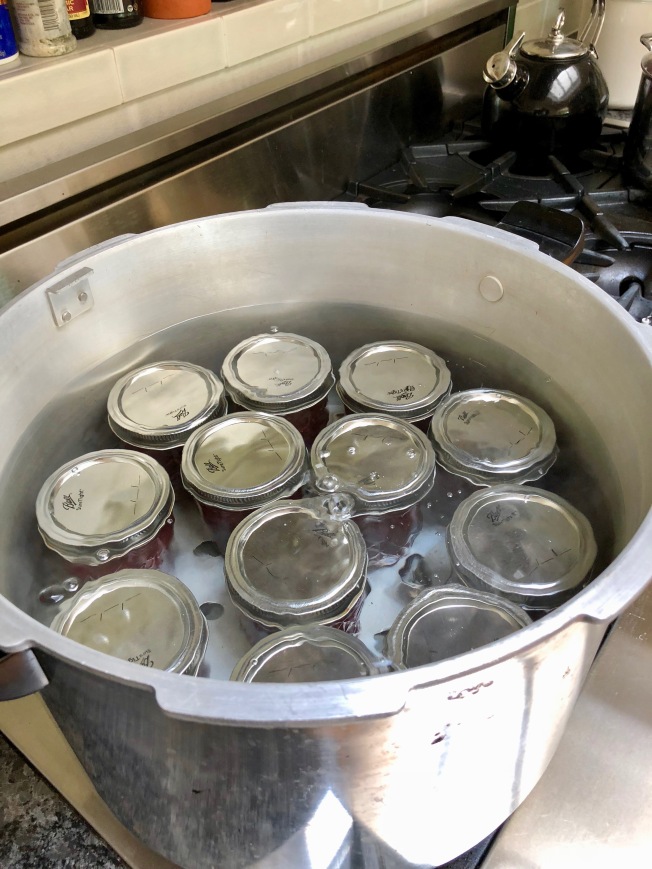 the necessary evacuation of air will occur and create the required vacuum for a safe and airtight closure of the jar.  Violà, two batches (12 jars each) of sealed and cooling jam.

Time to switch to freezing the next few batches of berries! But in the meantime, I’ve spent part of the day integrating the new chicks into the existing flock. This required a spate of my time today but is well worth the effort to get all the hens in a copacetic place for the future.

As you may remember from the previous post, the new chicks (now just over 8 weeks old) have been living in a mini coop within the larger outdoor coop. This facilitated an initial phase of both groups getting to know each other with a wire barrier to keep them separate. As of 8 weeks, the pullets (which are what we call teenage female chicks) are ready to transition off their baby food and graduate to an intermediate food that they can share with the older girls who are considered “layers”.

So, this morning, I cautiously opened the door between the youngsters and the adults (just enough to let the little ones out but kept the big girls without reciprocal access to the mini coop) and allowed the newbies to venture out for a bit if they were so daring. A few of the more adventurous ones took advantage of this opportunity and stepped out with caution.

The first attempt was pretty mild as the babies were cautious. The second attempt was a bit more fraught as I realized that the 30 minute play date I had envisioned was not easily ended if the pullets were not all safely back in their coop. In other words, I did not want to leave the area until it was all re-secured but the youngsters didn’t all realize how to get BACK into their coop and were frustrated at seeing their mates through the wire mesh and not re-joining with ease. This took some careful management but I did it!

I have since completed a third successful integration attempt and am very pleased with the group interaction. So far, there have been minor demonstrations from the older chicks of who is boss. This is totally expected since even the younger group already has their own pecking order and so this is all expected behavior and I’m generally pleased.  A few of the older flock were actually needy and jumped up on my lap and shoulder today to show they still wanted some attention from me as I watched the youngsters play.

Our other weekend news: we celebrated our 39th wedding anniversary yesterday… and had the additional pleasure of attending the wedding of dear young friends, Max and Amy Ryan who said it best in their darling little wedding favors of succulent plantings in pots…congrats to all of us!