Do you happen to remember the children’s story of the the Little Red Hen? The origin of this story has been attributed to a Russian fairy tale but it was actually popularized as a Little Golden Book publication when I was a kid and it is still in production.

Here is a quick synopsis: basically, the Little Red Hen finds a grain of wheat and wants to  plant it, harvest it, thresh it, mill it into flour and then bake the flour into bread. She asks for help in doing this from all the other barnyard animals who decline to help her along the way but in the end, they all want to help her eat the beautiful bread she baked. At that point, she declined their help eating the bread, stating that those who do not help in the process should not share in the final product.

So, I sometimes I think of myself as Little Red Hen because I want to do every piece of the work from start to finish. Unlike LRH, I have plenty of offers of help from friends but I tend to be a control freak and work much of the time by myself. My excuse is that it is more difficult to coordinate with helpers than to just do what I need to do under my own steam when I’m ready to do it.

But, during the last month of busy farm work I’ve gladly accepted some help from some very special people. We enjoyed the company of my cousin Peggy and her family over the pre-Fourth of July weekend when they were in town for a wedding. Peggy acted as baby sitter for her son Zach’s young child, Weylin Jasper Jackson who carries the best nickname of WeyJay! What a delightful baby! So fun to spend time with WeyJay’s mom, Jayne…hoping they visit the farm again soon! 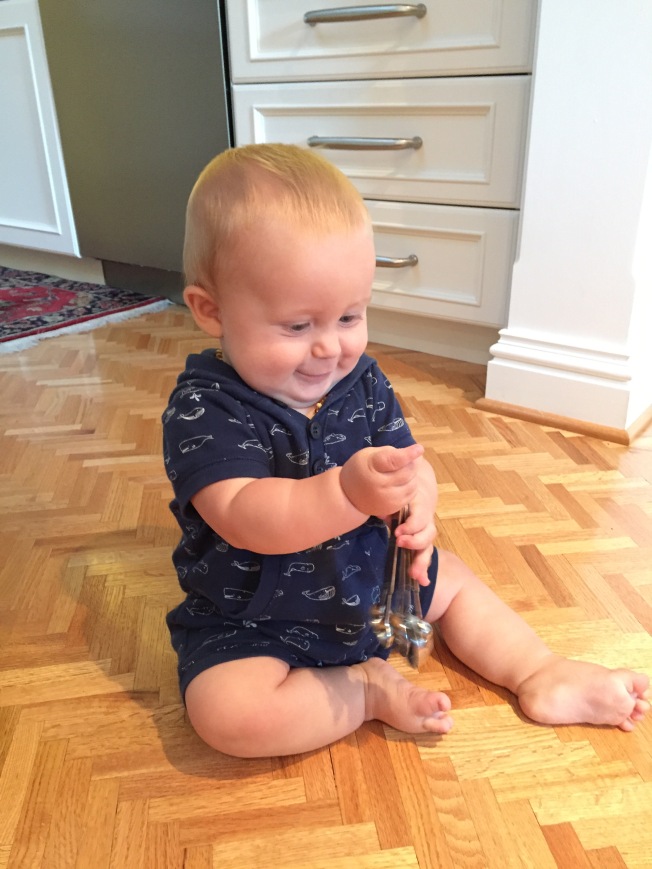 Peggy and I had so much fun over the weekend. She helped me harvest blueberries which reminded me of the photo of us as youngsters at my grandma Luehrman’s one summer when we were all picking corn. I’m the one hoisting a shucked corn in each hand, next to Peggy in the gold shirt holding a bag of corn with my sister, Lisa.

Then we made sweet pickles together and WeyJay got into the act after we finished all the slicing! Peggy and clan also sat with us that Saturday on the screen porch, ceiling fans a whirring, as we greeted our egg subscribers and CSA buyers. What a fun visit! 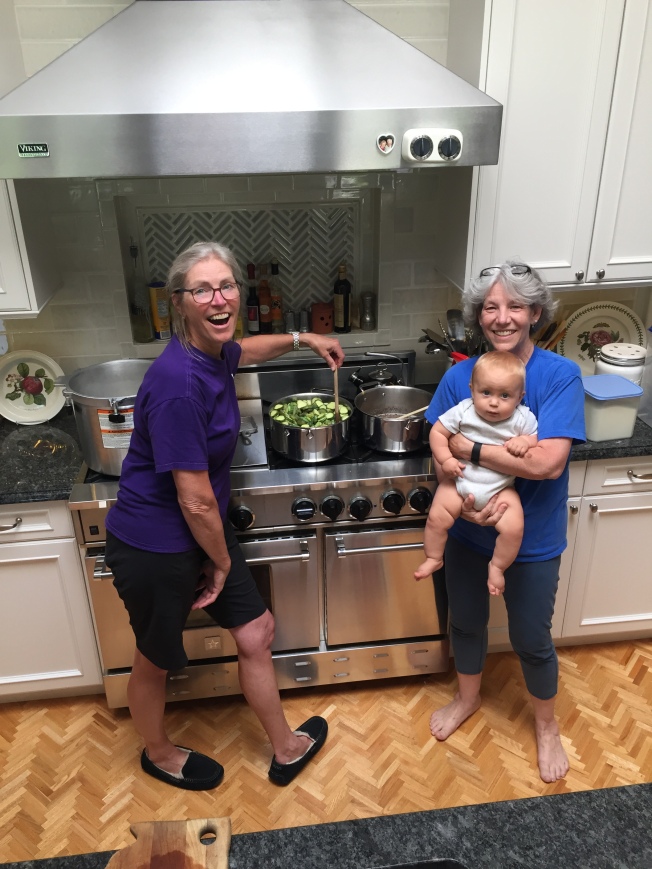 We moved on to Fourth of July which seemed like a week of festivities since the firecrackers went off in our area for nearly a week! We joined the Wards for their block parade and walked with Coulter along the route. 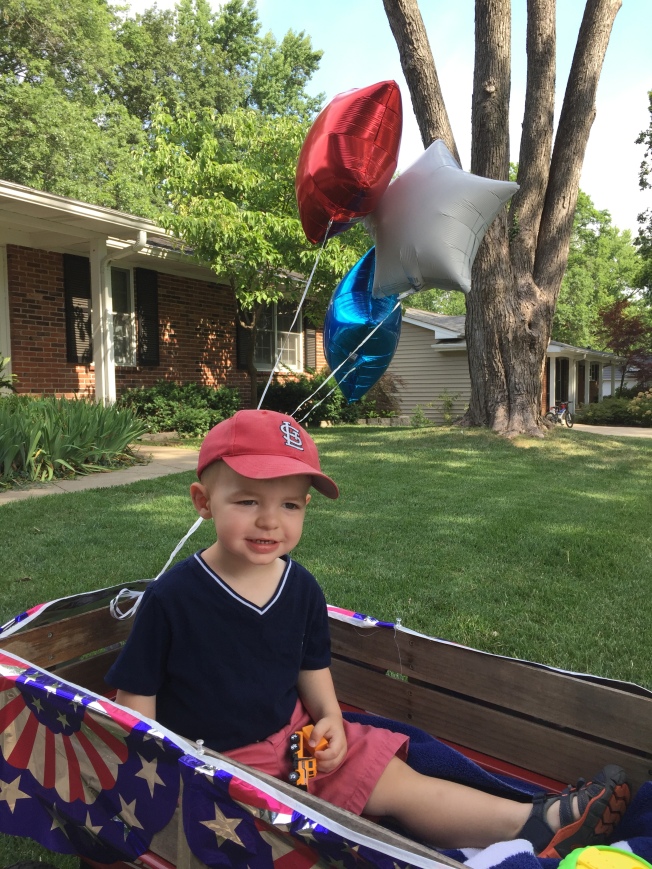 The heat of the summer began in earnest after that which provided us with lots and lots of heat loving crops such as green beans…tray after tray, all demanding my attention!

I both freeze and can them for future use. A recent sale on canning jars prompted me to stock up!

Although it is nice to have fresh frozen green beans, it is good to have the jars of them for the likes of Shepherd’s Pie…a family favorite! 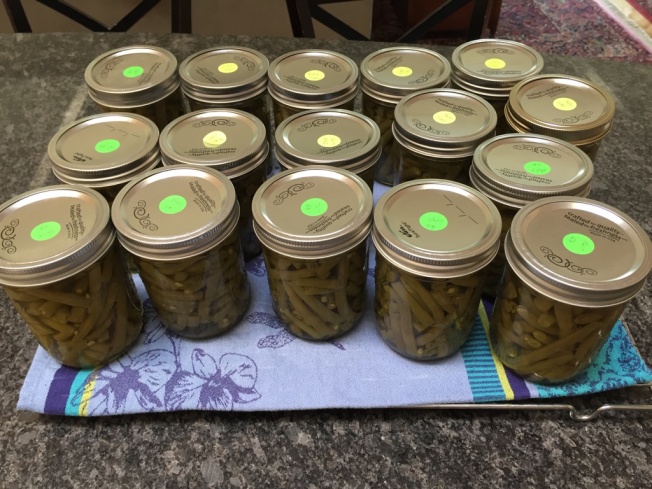 The garlic finally finished drying in the barn and I enjoyed the simple preparation of sifting through the bulbs and cutting the stems to make them into little lollipops to sell to our customers. I appreciate those who can tell the difference between our fresh garlic and the limp store bought ones!

We had a small number of peaches to harvest this year after the very late, very cold snap but I must say we certainly relished eating the ones we did bring in to eat. They weighed approximately 8oz each and were so yummy as we ate almost all of them one evening with the Wards….topped with vanilla ice cream!

The tomatoes, although a bit slow to ripen, rivaled the large peach sizes.

They are thick as thieves on the vines and finally started to give us ripe ones for our most recent Saturday sales…pictured here with the Pontiac Red potatoes and scallions!

The Yukon Golds were every bit as popular and are nearly sold out now.

The honey harvest took a great amount of our time this month. First, we finally bought our very own electric extractor that can handle as many as nine frames of honeycomb at once. Here is our little darling!

We asked another beekeeping friend, Jeff, to make us a stand that would allow us to bolt the extractor down and then tilt it to get the honey out. Here is Jeff proudly showing us his homemade creation that boasted felt pads on both hinged sides so as not to mar our floors. 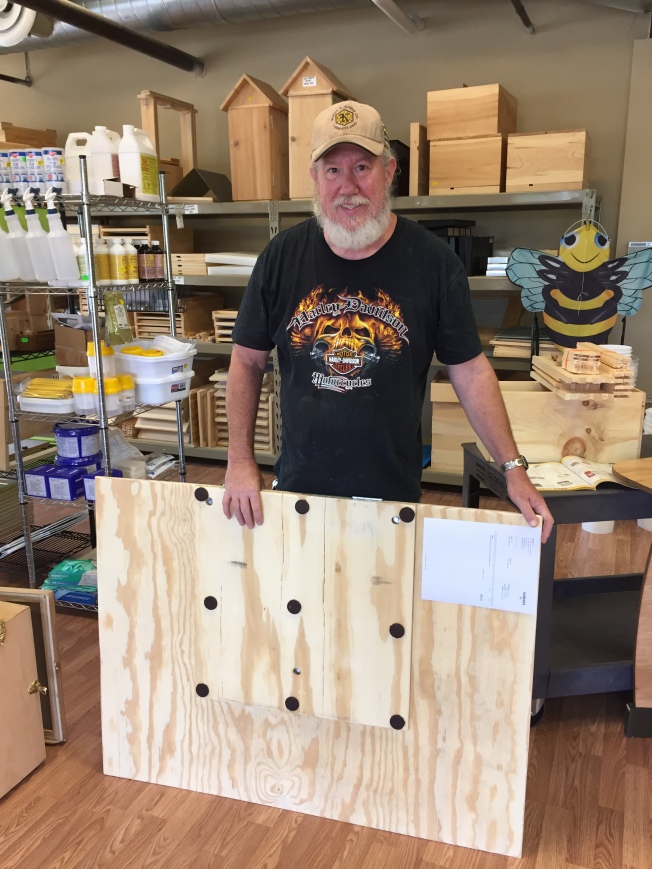 So, the day finally arrived for stealing the honey from the bees. My friend, Joan happily donned our spare bee suit on a relatively cool morning not long ago and we posed for a photo before all the heavy and hard work began.

Dave caught some pics of us in the midst of the fury of bees as they reacted to our breach of contract…stealing their precious honey! Oh, were they mad! 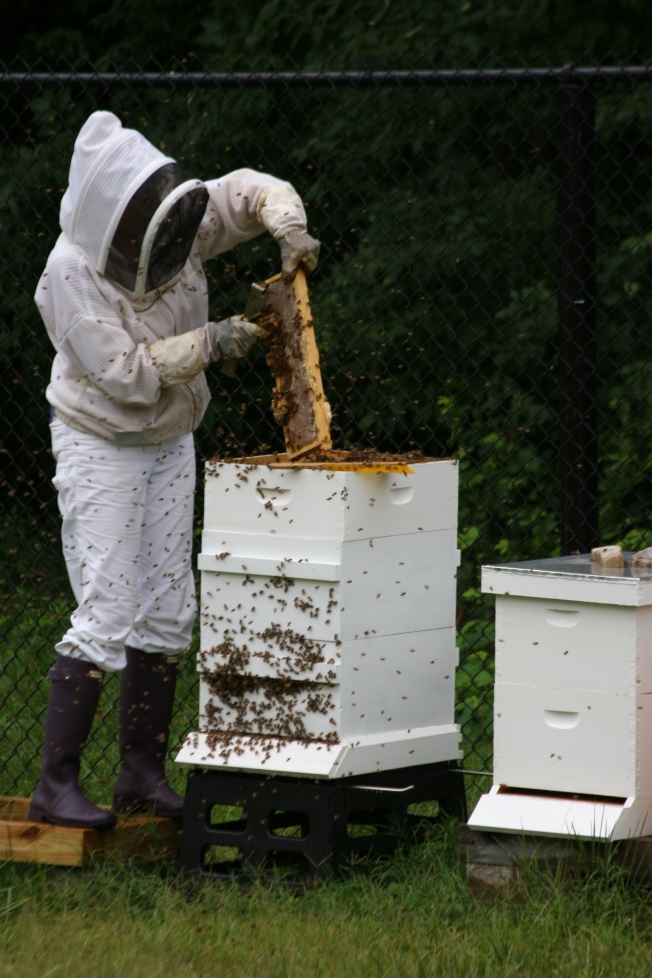 But the resulting honey harvest was our reward! Here we are scraping the wax cappings off the frames to reveal the honey.

The frames then go into the extractor and using centrifugal force, the honey is forced from the combs and into the waiting buckets below.

The honey is strained and then stored in 10 gallon buckets before I put it all into jars.

With the honey all secured, I can then fill the jars at my leisure but after jarring…

I secure labels and and the rest of the packaging for sale and gifting to our special farm friends.

Since the honey harvest we have been in a severe drought accompanied by record heat which nearly did us AND the chickens in for a bit! I can’t believe how miserable the poor chicks were during this dreadful heat! Temps just last Saturday rose to 108 in Saint Louis even tho in Huntleigh I only saw 106.

The chickens have a tough time with heat stress due to their inability to sweat and self cool. So, not unlike dogs, they pant. They also hold their wings out and away from their bodies at a 90 degree angle to try to cool off. The most dreadful of their situation tho happened when I realized they had diarrhea…this due to their huge intake of water which went right through their system, depleting them of electrolytes. Ugh! I tried to help keep them cool by putting in trays of water with ice blocks as well as fans. Here is the fan system I set up between my workshop and their indoor coop with the door open to their outdoor coop for a “breeze”.

For some crazy reason, I went out a bit later to see that their improvised screen door had backfired on me and fallen into the workshop, nearly breaking the fan and the chair in the meantime! UGH!

I was able to put everything to rights but it was a bit discouraging to say the least. Next I discovered I had a lame chick. Oh my, what next? The following morning I saw this poor gal on her roost with a swollen foot in evidence. Do you see the difference between her two feet? This could be two things…either bumble foot or gout.

A quick inspection told me that she had bumble foot which is when a chicken will have a small spot on the pad of their foot that gets infected and causes them to favor the limb as the infection grows. Arg! Here is what the bottom of her foot looked like. The dark circle is where the callous covering the infection was located.

After a good soaking I was able to remove the callous and treat with Vetericyn and Neosporin. 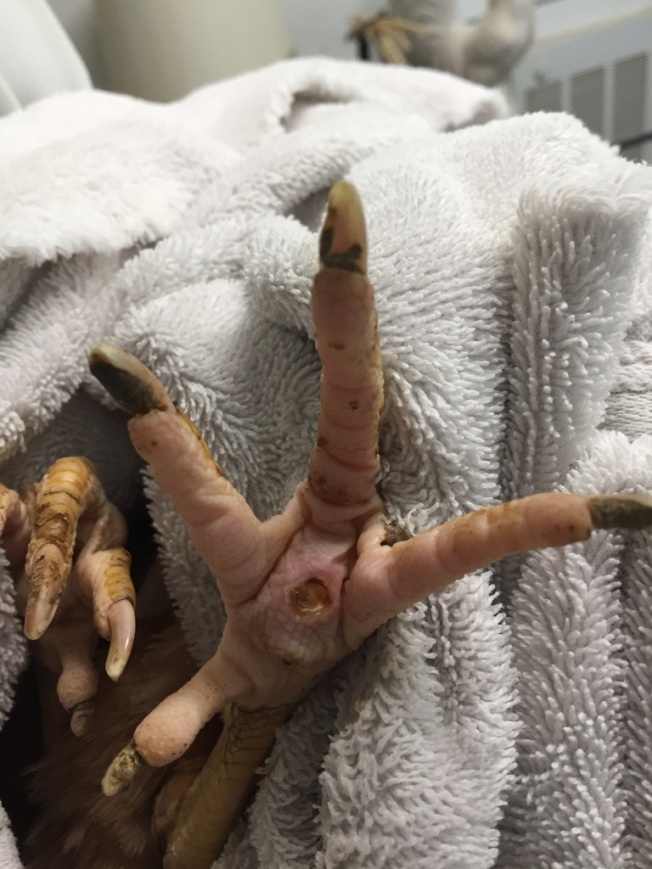 She then got a bandage and some isolation time to heal. Each morning I reapply the meds and she seems to be much better now. Interesting…she is not my Little Red Hen (the name I have for one of the Rhode Island Red chicks), but rather a Cinnamon Queen. 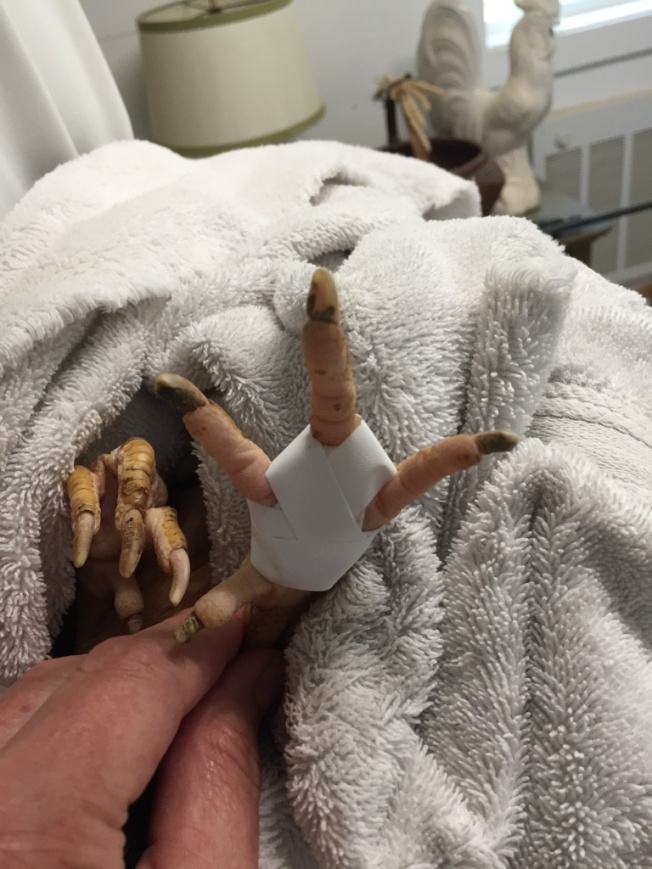 Our days are brightened by little Coulter who pops over to say hello regularly.

We had the opportunity to keep him recently while his mom and dad were out of town and despite the horrible weather, we made it to one of his favorite spots…the zoo…where he loves to brush the goats…

And ride the frogs…

It makes you wonder who is in charge at the end of the day! 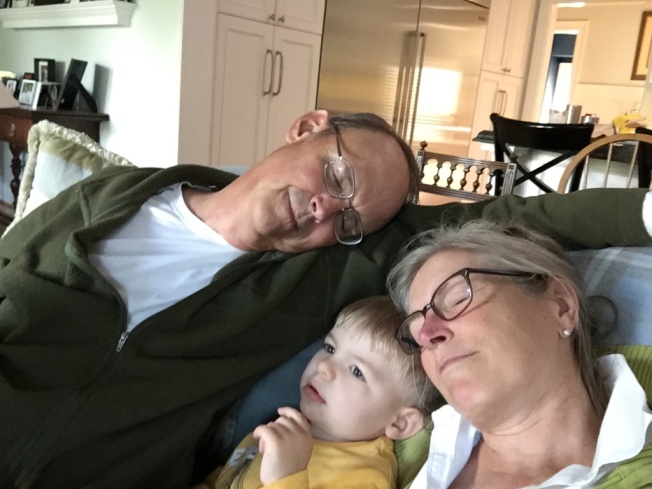