It has been quite a week here at the farm. With so many updates, I’m not sure where to begin! Most of the changes have to do with the chicks and the barn status. Knowing that the chicks would soon be getting access to their outdoor run I decided to introduce them to their nipple water system. I made a smaller version than the larger outdoor fountain available to them inside their coop. I think of these as their fountains of youth! So I set the first one up and tried to train them to use it. It did not take long since they are mostly pretty curious and I followed the directions that were provided! 😉 Here they are taking a looksie.

The idea is that they peck at the little nipples and they get a drip or two of water. This keeps their water supply clean and helps to eliminate any standing water which could grow bacteria. It also serves as a distraction since it is almost like a new toy to them.

I also was trying to give them a little treat after making tomato sauce the other day. I took the skins and leftover matter from the food mill down to their coop and put it out in an aluminum pie plate as if to serve them a bit of dinner. What an idiot I was…of course the shiny pie plate was a distraction that made them uncomfortable.

Duh! I took the scraps out of pan and put them directly on the floor and the crowd went wild! It was hilarious to see them running around the coop with a piece in their beaks as if they had captured the flag!

In the meantime, the painters arrived early Saturday and spent the day painting the barn. This was important since the chicks at 5 weeks old tomorrow are feeling the need for some additional space but their outdoor area still needed some painting. Scotty, Doug and Dave obliged me and got the run painted first before attacking the rest of the barn.

Looking much better now with a bit of color on the board and batten exterior!

So it was a big day today to finally put the hose of the outdoor water fountain in place and let the chicks begin to explore their new digs! They were cautious at first but then explored a bit further.

They found another Farley gate for roosting purposes and have taken their first dust baths! 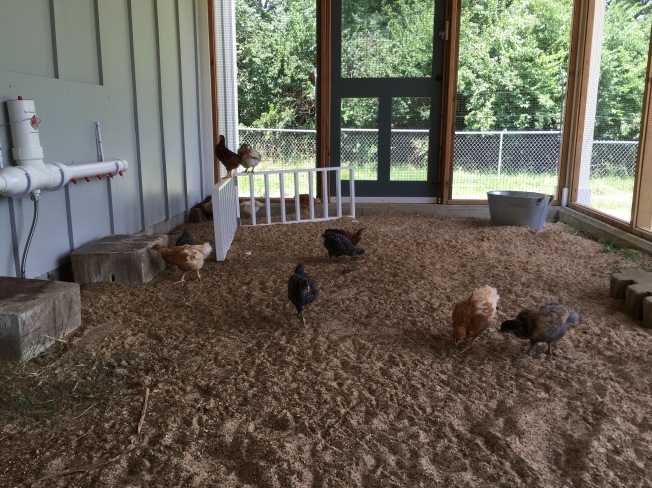 Coulter now goes out with us each day to visit the chicks but as much as he likes all their activities, he may best enjoy the chicken on the screen porch as it stands still for his inspections!

On to the bees: We picked up and installed the new queen on Wednesday. Here she is in her little cage with some attendants waiting to ‘go’. She is “marked” with a dot of ink on her back so she is easily spotted in the crowd. I took a nail and punctured the sugar plug that separated her from the rest of the world and knew that her new subjects would eagerly eat thru the sugar to welcome her to the hive. 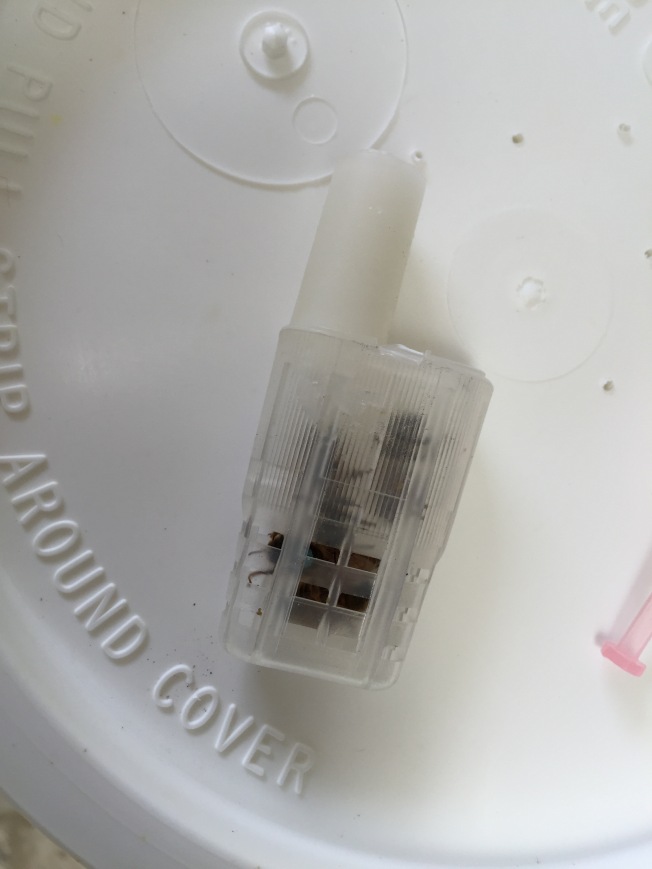 I re-inspected the hive yesterday and sure enough, she was out, roaming the frames and hopefully filling lots of empty cells with eggs! This hive is currently being fed with sugar syrup to help them adjust. The next step for the bees is to test for mites which is best to do around August 1st. More on that later. I’m pleased that the assortment of sunflowers I planted near the back terrace are now really starting to bloom and the bees will enjoy this summer time pollen and nectar!

In the meantime, I’m continuing to process the harvest whenever I get a chance. The blueberry bushes are about spent (I’m almost relieved since the time commitment to pick is daunting) but I’ll pick a bit more here and there which should bring my total close to 140 pounds…that is a lot of berries!  Dave continues to harvest twice daily and so far has a yearly cumulative poundage of about 900lbs! I have not counted how many bags of frozen produce I’ve tucked away in the freezer but his Excel sheet reveals that I have canned 355.5 jars (in various sizes) of produce so far this year! Whoa, that is a lot but much more to come! I’m just a tad bit behind since I’m finalizing my Missouri Botanical Garden presentation for Tuesday, August 2nd 6-7pm….be there or be square! I hope to share as much information as I can about Preserving Your Harvest! Thanks in advance to daughter Kate for her support on the Keynote presentation platform…without her, this would have been even more daunting!