I’m back at the farm after a weekend trip to Phoenix where a healthy contingent of Luehrman cousins gathered to remember our dear Bob and Helen. The church service was beautiful and the bear-like hugs (Bob style) were much welcomed and a reminder to keep family near and dear always. Helen, the last of my father’s siblings, was our family glue. She would be most pleased if we would all take up the mantle and keep in touch regularly. Since some of the cousins read this blog I’ll put my toe in the water now and promise to help plan a future reunion. Below are some of the children of six of the eight original Luehrman siblings.

When we manage to gather, I hope the Brotemarkle brothers, David and John, (famous for their team grilling efforts) will be our barbecuing crew! Here are the Smokey Brotes, David and John with spouses Rosane and Michelle!  Maybe they’ll need some garlic!?! 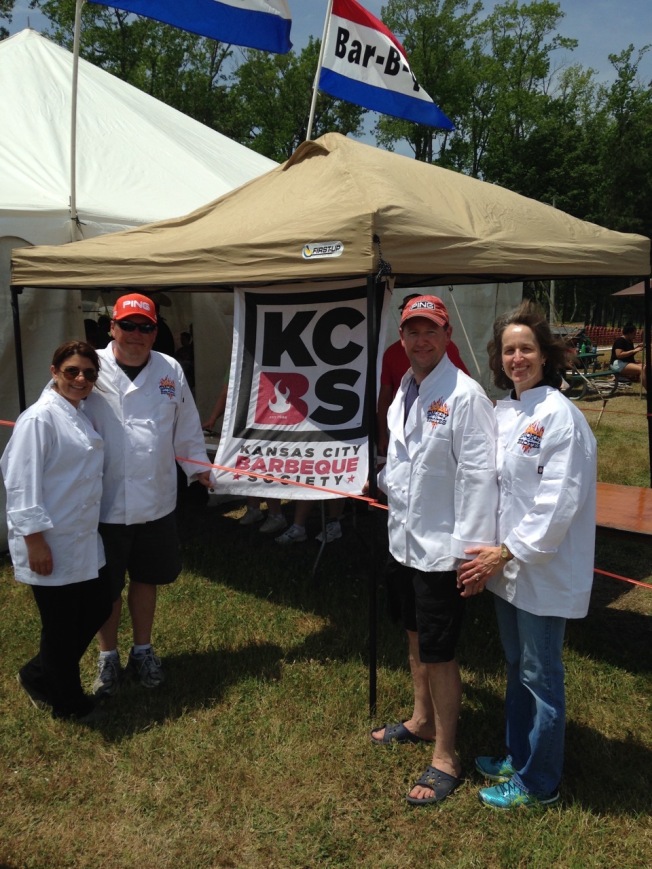 There was little time to pause on my return as the first three (of the five) blueberry varieties are now ripening. I have relished the solace of the early hours in the “blueberry palace” picking tray after tray of these sweet fruits. I have harvested over 45 pounds so far this year but if last year’s volume is any indication of what to expect, I should be a little over a quarter of the way done with picking. We delight in having them fresh each day but I’m freezing gallon bags full of them for the off season and will make jam as well. I’ve already made 85 half pint jars of strawberry jam! Lord help me, that is another blog I’m behind on!

Although the blueberry harvest will continue for the next month or so, the garlic was entirely harvested in short order yesterday. How easy was that?!?! We brought in 18 pounds in about 30 minutes of digging! The signs of readiness were that the lower 3-4 leaves of the stalk appeared yellow or brown as you can see here. 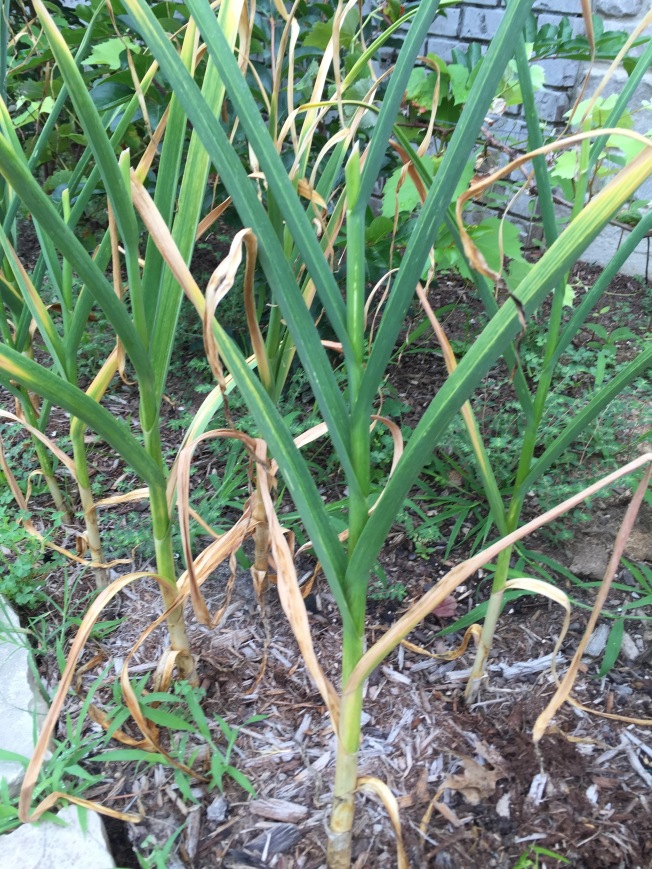 We used a pitch fork to dig out the plentiful bulbs. 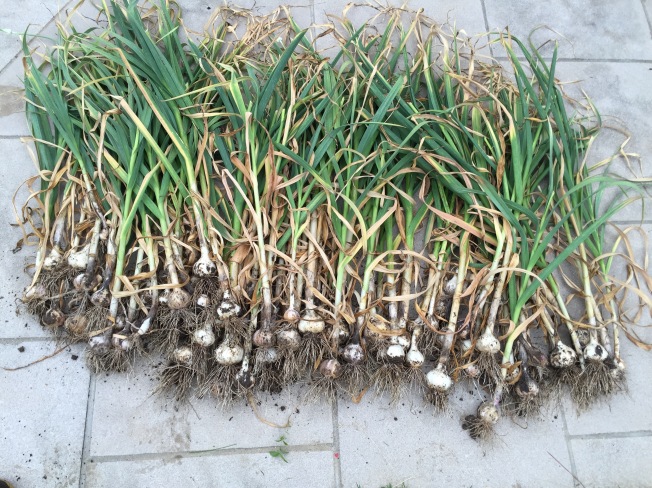 To get an idea of scale, here is my hand…showing the German Extra Hardy which is slightly larger than the German Red.

After digging them, I followed the very simple instructions to prepare for drying: “brush off dirt and trim roots to a quarter of an inch”. They look like they all got a buzz cut!

We laid them out on an old screen door for air circulation (or they can be hung in small groups) to dry for two weeks before bundling and storing for the year. You can quickly identify the red variety here. I have about 75 bulbs which I will cherish for cooking all year! 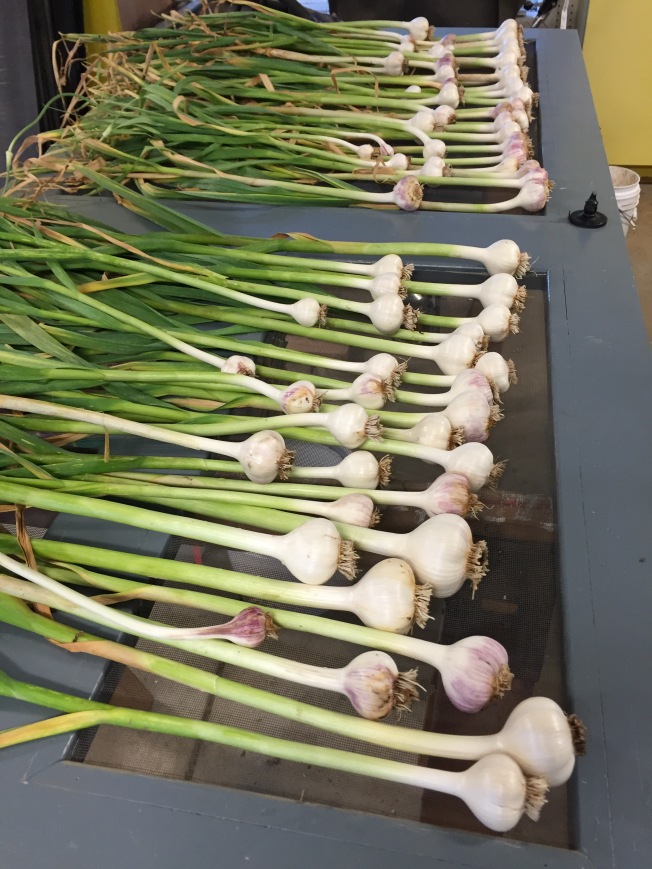 I also harvested a 20 foot row of peas which were a bit less than 5 pounds in the end but were fun to pick and shell!

The seasonal crops are producing well row by row and we are already replacing spent plants such as spinach with other veggies such as beans that love the heat. We do this sequentially so that we aren’t inundated with too much of one thing at a time. 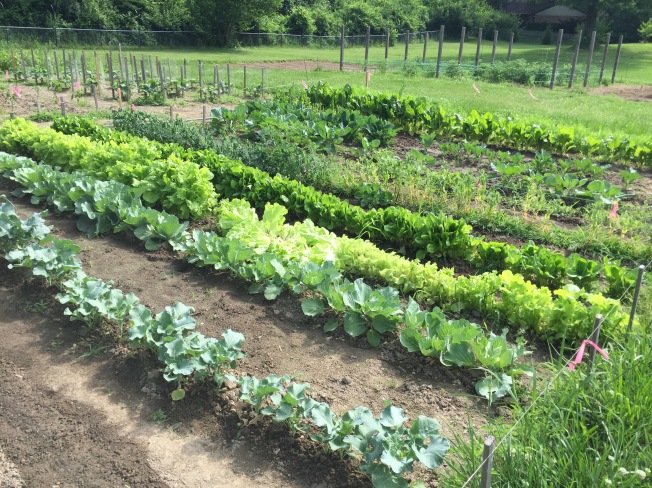 We are also pleased to share the results from our first fruiting fig tree. We got this tree as a lark when Dave made his annual trip to Stark Brother’s nursery this year and we have been coddling this strange plant along for fun. It is in a pot on the terrace and we water it regularly but haven’t have much time for it lately….until…we found that it had a fruit on it! We are pleased and see a couple of other little sprouts that might be future figs as well so I guess we will cross our fingers and hope for some Figgy Pudding this Christmas???

The bees are surprising me as well with the recent evidence that we will actually have a honey crop despite the very young colonies we started with this year. I had two delightful and enthusiastic ‘guest’ beekeepers help me out recently. First was my cousin Peggy’s daughter, Lindsay, who stayed with us several days while she was working at a field hockey/recruiting camp for Holy Cross where she is the Varsity Women’s Coach. We love it any time she visits!

Next was son Peter who was in town for my mother’s memorial which was more like a family reunion at the farm to celebrate her life. Here we are preparing to look at the bee activity…he makes me look like a midget! 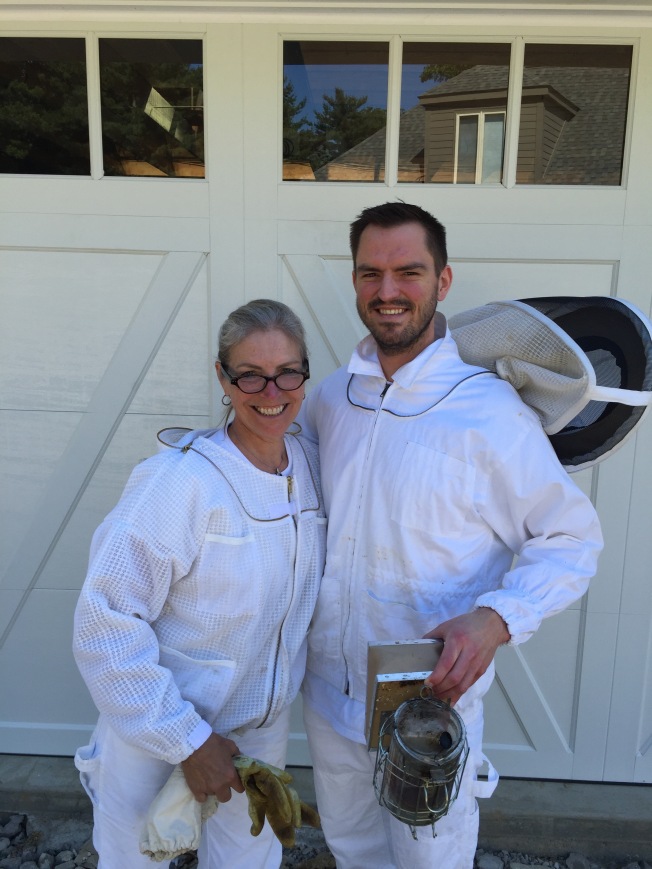 And here he is finding the joy of new brood and lots of activity on one of the frames. 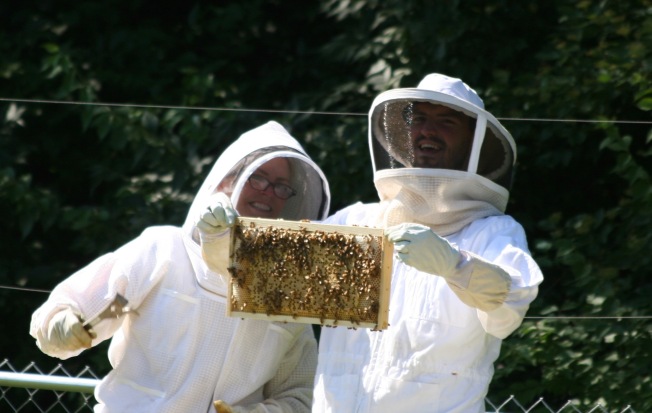 The bees are doing great and I have recently added a second honey super to the most active hive. This frame shows a nice, capped brood pattern with honey stores at the top for their own enjoyment next winter.

The barn is progressing and is nearly finished which is a good thing since the chickens will finally arrive next week. We ordered the following varieties from Cackle Hatchery : Barred Rock, Rhode Island White, New Hampshire, Easter Egger and Buff Orpington. All are considered relatively docile chickens but most importantly prolific egg layers. It is so exciting…I can hardly wait and neither can Coulter who is running around, talking and keeping us entertained non-stop! 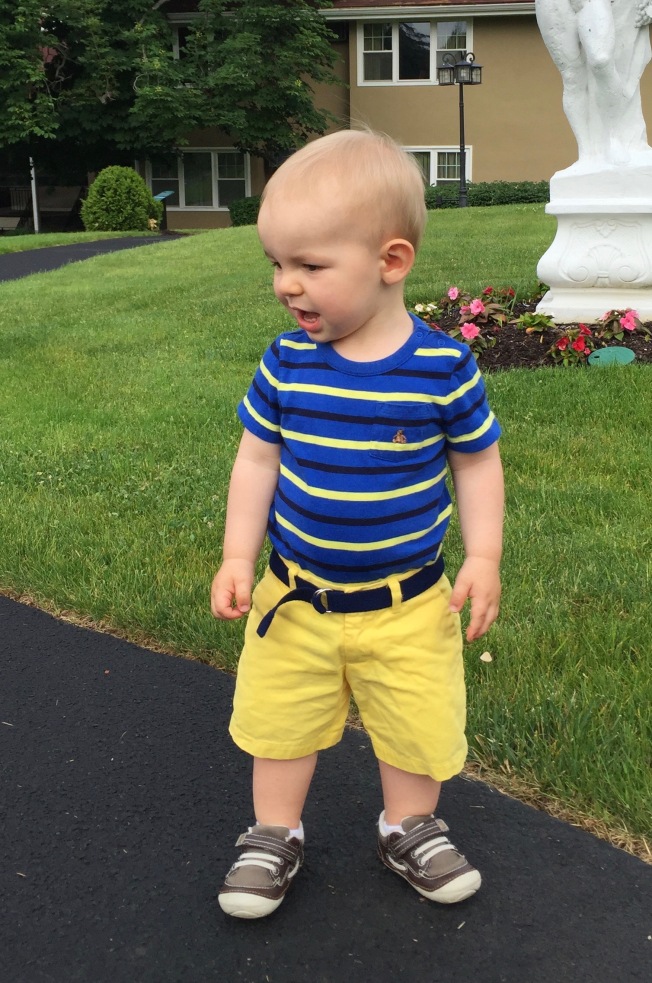 Here is a barn progress pic…getting closer and closer to finishing!