Much has happened here in the last week with the progress on the barn construction but the procurement yesterday of our new bee hives was perhaps more memorable. A little background first – or my way of making a short story a bit longer but hopefully more enjoyable.

After two years of being an apprentice beekeeper, I set out this year to own and tend my very own bees. (Jurgen actually owned the hives that were here the last two years which are now back in one of his beeyards.) I found a very experienced beekeeper, Neil Brunner, who sells bees and equipment from his farm in Stockton, Missouri – about a four hour drive from here. Every spring he does quite a brisk business selling to folks like me who have pre-ordered their nuclear family of bees from him the previous January. I spoke with Neil several times last winter before deciding that his gentle, Missouri grown, Italian bee stock were just the right fit for me.

(Strike that and replace…for ‘us’ as Dave is now officially a part of the bee culture at the farm and even has his own apiary outfit to prove it. If there was ever a moment when he was re-thinking the “for better or worse” vow he took nearly 37 years ago, now would be one of those! Ha!)

So off we went yesterday morning to collect our bees. It was an excellent day to abandon things here since we had already received an inch of rain the previous day and were only expecting more of the same. We knew we had arrived at our destination – a gravel, numbered, maze of a rural road in southwestern Missouri – when we spotted a long line of pick up trucks on the side of the road amidst a cloud of flying insects that happened to be bees!

So we followed suit and got in line to pick up our order of bees. After a bit of waiting and conferring about the details, we had a truck bed full of bees and hive equipment and set out for the 4 hour drive back home. The rolling Missouri countryside was populated by small farmsteads of horses, donkey and alpacas but mostly cattle, milling about in green pastures but we didn’t have time to admire for long as the threat of dark clouds, windy weather and the threat of heavy rain was following our path homeward.  We stopped twice to adjust our cargo after spying a stray bee or two that had lofted up and away from their screened hive openings.  Wouldn’t you know, one of our stops was at an open-air, cattle auction house where the nearby sounds of mooing and baying was loud and enticing but we could not afford the distraction and so we continued onward.

We pulled into our driveway just as a torrent of rain, wind and pelting hail began. It had been our intention to place the bee hives on their stand and do what we could to settle them in for the night. After an initial attempt, we retreated to the garage, soaked to the bone, with the bees still in the truck bed and waited out the worst of the storm. It is easier to admire the zeal of Mother Nature when you are not being threatened by her loud and dramatic showing of thunder and lightning! Here is the start of the hail on our walkway. 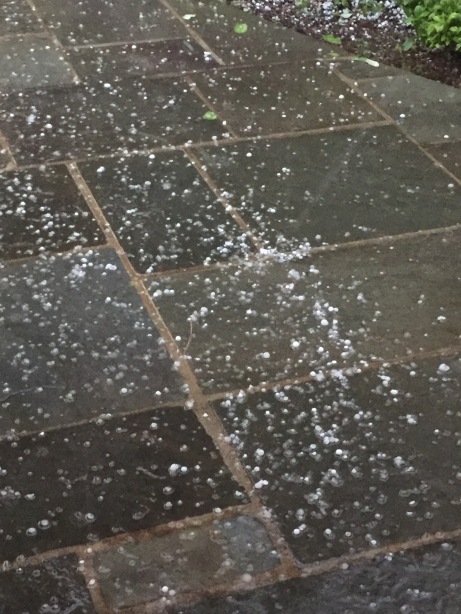 But patience won as we waited for the storm to pass and were rewarded by a rainbow in the lens of my camera. 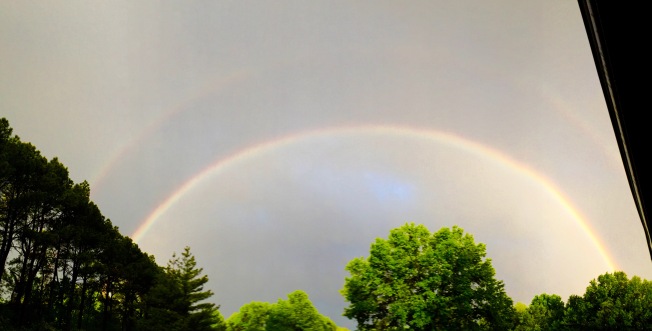 But this wasn’t just any old rainbow. Look closely and you will see that not only is it rare to see both ends of it (two pots of gold?) but we also had a double rainbow…one above another! I cannot tell you how deeply this impacted our experience at the time as we witnessed a simultaneous display of Mother Nature’s wrath alongside her benevolence. We think that the bees at Seven Oaks Farm & Orchard are meant to BEE!

And so as soon as the lightning subsided we placed the bee hives on their stands and retreated indoors to await for morning to adjust their situation. This morning I added syrup buckets to each hive in order to support the bees while they search for future nectar in our area. They showed evidence of exploring their surroundings as they began to buzz around their hives and seem to have survived the trip just fine! 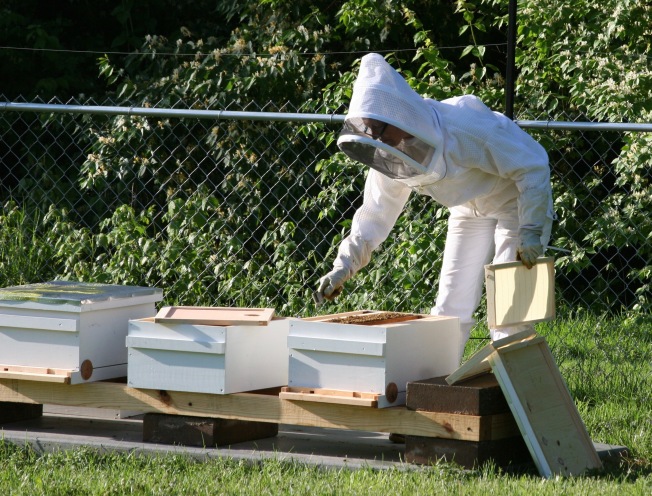 After all my glowing reports on Mother Nature, the Wards did not fare so well this week as a giant, eighty foot maple tree fell in their backyard. Thank goodness it missed the house and power lines but they have quite a mess to deal with in the near future. 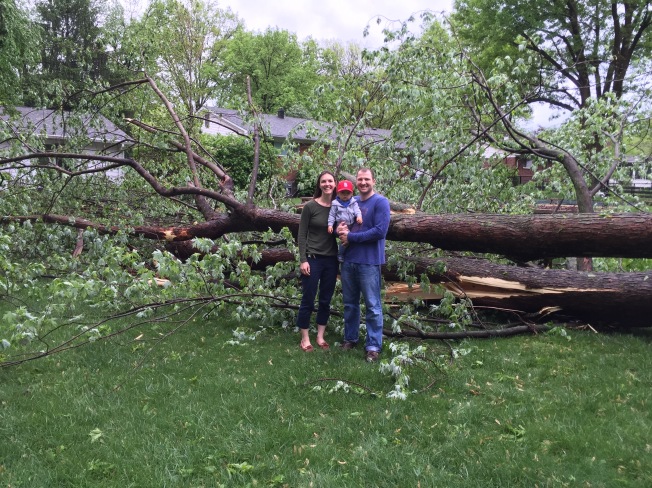 The barn construction continued a pace this week with the first floor framing and delivery of the roof trusses but not before the plumbing and sewer lines were put in place.  A muddy mess of sewer lines!

But fun to see the framing of the interior walls begin…

After walls went up the trusses were delivered in an impossibly tight situation on a narrow lane.

Walls begun and trusses ready to be hoisted by crane this week. 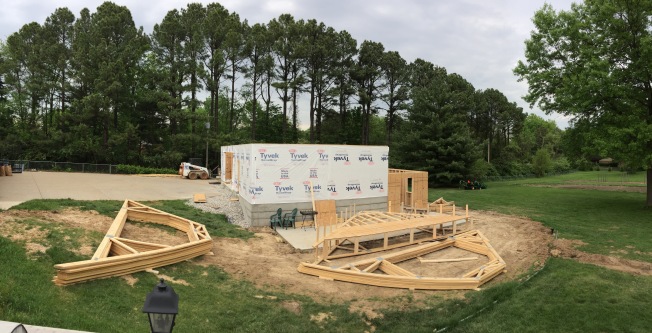 Other projects continued forward last week but none so infamous as my “Shane” project which was hilariously misinterpreted by Dave as my “shame” project. I’m still laughing but hope you won’t be bored by another story inside a small story! Do you recall the part in the book  Shane  by Jack Schaefer published in 1949 when the father, Joe Starrett, shares with Shane, the ‘hero’ gunslinger, that he has a stump on his farm that he has struggled to remove by himself? The two men go after the stump together and their joint efforts are enormous but successful. There are all sorts of underlying themes to identify with in this section, but I always considered one last point in our Alleé of trees that reminded me of the book since I’ve been unsuccessful at attacking this area…until now. Here is what it looked like on the face of it.

Innocent enough, but I knew from dealing with it over the years that it was a clump of scraggly growth on top of large rocks on top of horizontal fencing material set in place years ago to help the inevitable erosion of the swale area of the fields. The longer I waited to eradicate this area, the more it grew and became unmanageable. Until I decided enough was enough and asked Dave to help me attack the area. Haha, he thought I was calling it my “shame” area which was also a good description! So, with either appellation, we went after it last week using the clippers, loppers and the tractor with straps. Here is Dave working with the tractor after I bushwhacked!

We got at least three or four loads of large rocks out of this area and offered them to friends. 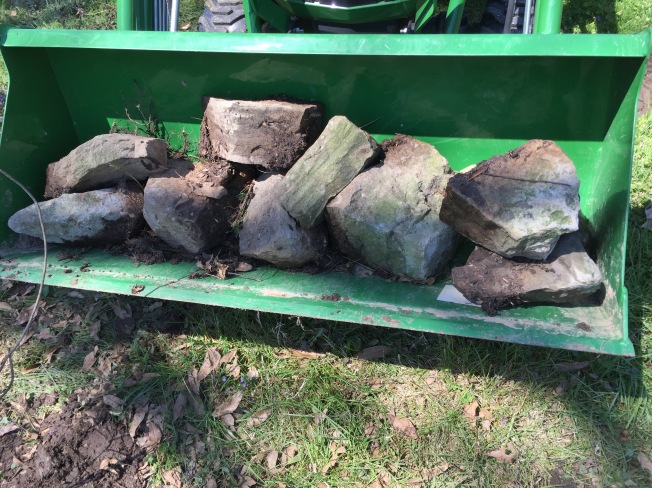 Kathy Waldemer was the first one to raise her hand to help take these off our hands! We could not have been more delighted than to assist with getting them from our yard to hers! The best part of this story is that after arriving home last night from our bee adventures in the hail and rain, we found a cute package at our front door from Kathy: 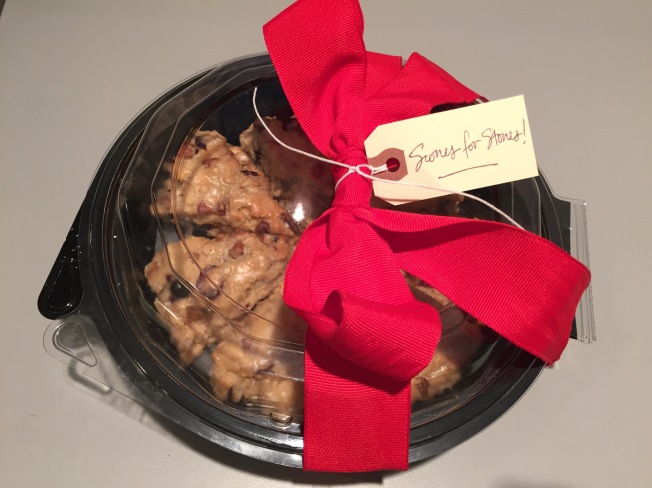 In case you can’t read the note, it says, “Scones for Stones”. Kathy happens to make the most divine scones and she knows that I am a HUGE fan! I have requested the recipe and she agreed to let me share it here so please be patient for the next installment!

One thought on “All Hail Mother Nature or Scones for Stones”