I can’t believe how quickly time passes at Seven Oaks Farm these days! We have had so many activities in February and March…it seems we are endlessly busy! I’m touched that so many readers have reached out to ask if all is well since they seem to LIKE the updates and are looking for the next episode at the farm. I hope to be more regular with blog posts in the future but the busier I am, the less time there is to write!

Let me go back to February for a few updates. One reader asked how we could possibly top the His and Hers Machete purchases when Valentines Day came around?!? Well, of course, we had an answer, but this time we gave ourselves something just a little less pointy and sharp as Valentines Day brought about a mutual gift of everlasting fruits! Yes, Dave and I decided to expand the orchard (have mercy!) with the addition of more fruit trees and some grape vines, all from Stark Brothers Nursery in Louisiana, Missouri. We made an order for Stanley Plum trees which are a free stone and self pollinating variety. Of course the yield is better if pollinated by another tree of the same variety, so we bought 2 but also know the bees will help us out on effectively ensuring pollination.

We also decided to put our toe in the water with some grapevines. We bought 3 each of two seedless varieties – Concord and Marquis – both of which are recommended for our area. They were purchased as bare root specimens so they are currently in a dormant stage in one of our refrigerators until it is time to plant. Here are the Concords…

And here are the Marquis….

February was also the regular orchard pruning month since this needs to be done while the trees are still dormant. The majority of the trees are on their fourth year of pruning and the good news this year was that the trees are much more developed than they were in the past which meant it took a lot longer to actually do this work since there are many more cuts to make. We once again benefited from the expertise of our arborist friend, Jon Lanaghan, and picked a day that was supposed to have relatively moderate temps. Well, the weather predictions were wickedly incorrect and we found ourselves pruning in freezing temps that felt much worse due to brutally cold winds. It was one of those days when all the layers of sweaters and coats, topped by our long jump suits, did not keep the cold at bay. My teeth rattled for hours after we finally retreated inside, but we did get the job done and the orchard is off to a promising year! Each variety of fruit tree demands a different shaping which is why it is so helpful to have Jon’s guidance. I think he secretly enjoys coming to help us since he doesn’t have many other clients with an urban orchard of this sort. Many of the trees are now so tall that we had to reach up and pull branches down to us to make the cuts. We were encouraged by the evidence of a glut of fruit buds – which are different from leaf buds – particularly on the north side of the orchard which is where the stone fruit is located. 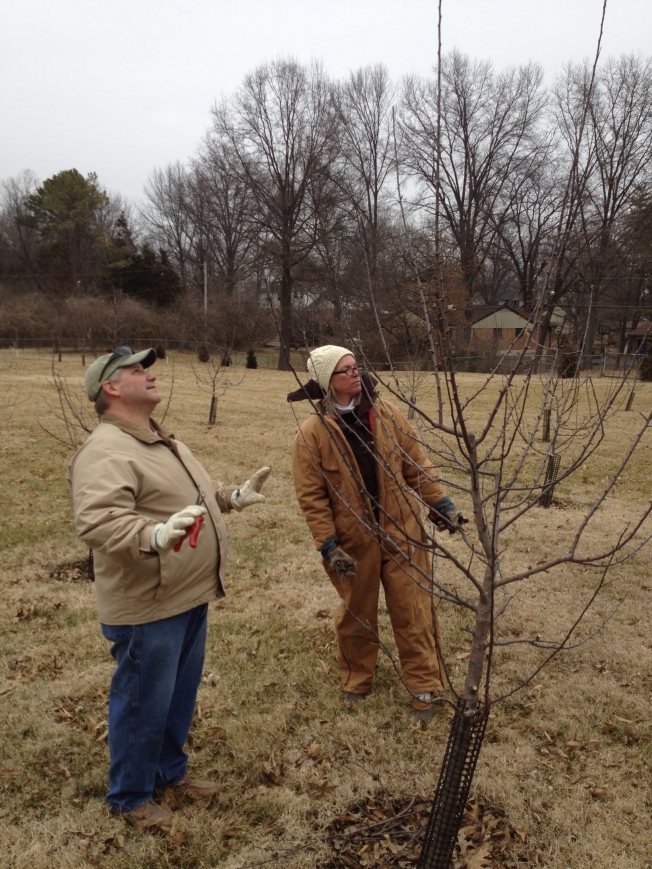 I attended another daylong bee workshop in early February that was presented by the Eastern Missouri Beekeepers Association. Last year I went to the beginners sessions so when it was time to register this year, Jurgen told me that I was qualified to attend the advanced sessions. That was terrific news! The speakers were impressive and I learned a lot but not unlike last year, after 8+ hours of intense listening and learning, I drove home overwhelmed with new and technical information but also inspired by this new knowledge. I purchased some new bee equipment (there were vendors there selling their bee related wares) and also a blue bird house that was hand crafted by one of the expert beekeepers in our group, John Pasha. He actually boils each piece of cedar in beeswax from his apiary before assembling the pieces so to better protect the house from the elements. My favorite parts about this house are the decorative, brass hinges he uses on the door to allow the clean-out of the interior and the copper around the opening which keeps squirrels from gnawing at the entrance. I’m crossing my fingers that we will manage to attract some blue birds in the future! 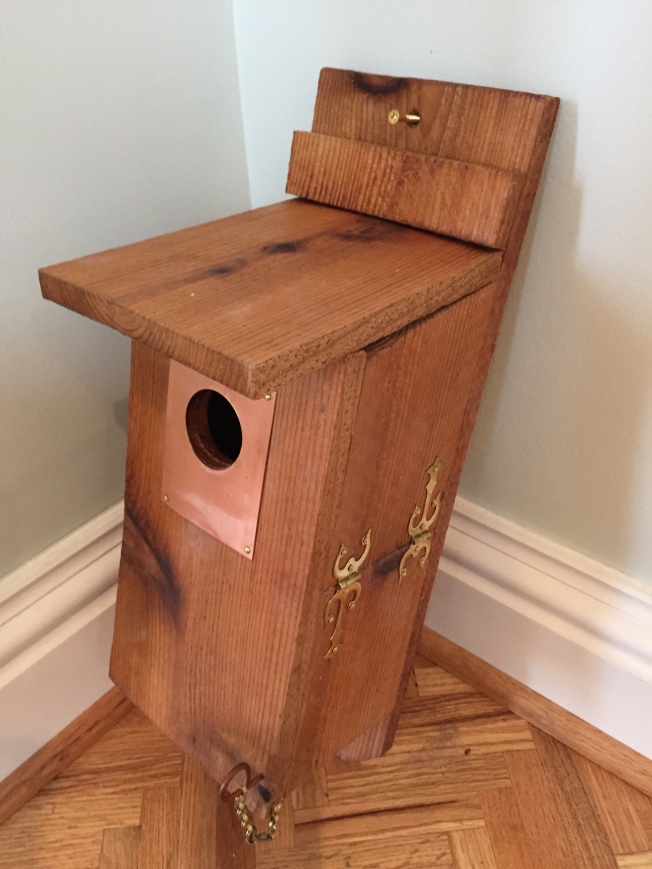 John also brought his display of antique smokers for an exhibit. Beekeepers use smoke to calm the bees when they are working with them and it was amazing to see so many vintage smokers, many custom made by beekeepers around the world. I think my grandfather, Irvin Telligman who was a blacksmith, would have enjoyed seeing these but I imagine as someone who knew how to use a bellows he would also have had an opinion about some of their effectiveness too!

February was a month of visitors to the farm as well since Kate and Jason flew in for a long weekend of house hunting and celebrating with a baby shower. We hosted the Walsh family – Chris, Jessica, Abigail and Lucy – from Kansas City for the weekend. Many of you may remember that Chris was Jason’s best man and Abigail did her best to sprinkle the seeds of love down the aisle at the wedding. They brought bundles of freshly baked goodness from their home to ours as well as fresh eggs from Jessica’s family farm. We devoured all these goodies with relish!

February quickly turned into March but spring weather was slow to arrive. While Dave drove to Stark Brothers in early March to pick up the new plant material, I managed to get out into the orchard to apply the once a year dormant oil spray. This is an organic way to smother any future insects while they are still in their egg stage by coating the entire tree from top to bottom with an oily mixture. It is best to do this on a calm, windless day, but the window of time for applying this is very narrow…after the last frost and before the leaves and buds pop out…so that day chose me this year rather than the other way around. Again, the increased size of the trees meant that I worked at this much longer than previous years and found that even the slightest puff of wind was rather messy as one must circle the tree while spraying and some oily blow back was inevitable. After half a day of spraying, I too, was sufficiently covered in dormant oil spray!

Despite being itchy to get out into the fields to plant the early, cold loving veggies like peas and potatoes, we must wait for the weather to cooperate by stringing together enough dry days to get the tractor into the fields to plow. That day finally happened this week but not without the threat of rain to keep us motivated. Although it would have been nice to have a bit dryer conditions, Dave managed to plow up both fields in one afternoon and finished within hours of more rain. You can see how muddy his tires are! 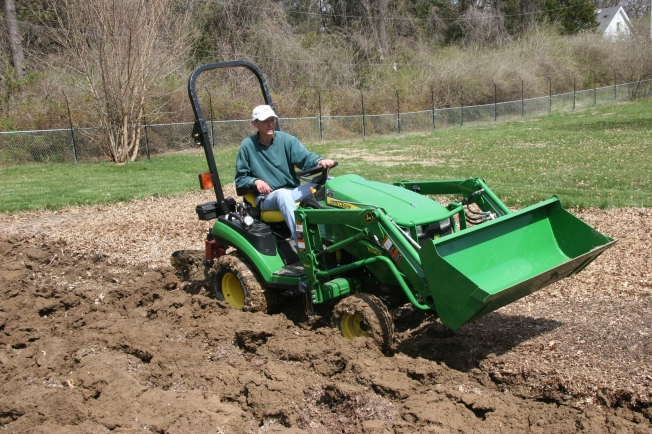 The peaches, nectarines and cherries are now beginning to blossom and the bees are delighted to finally find some pollen. 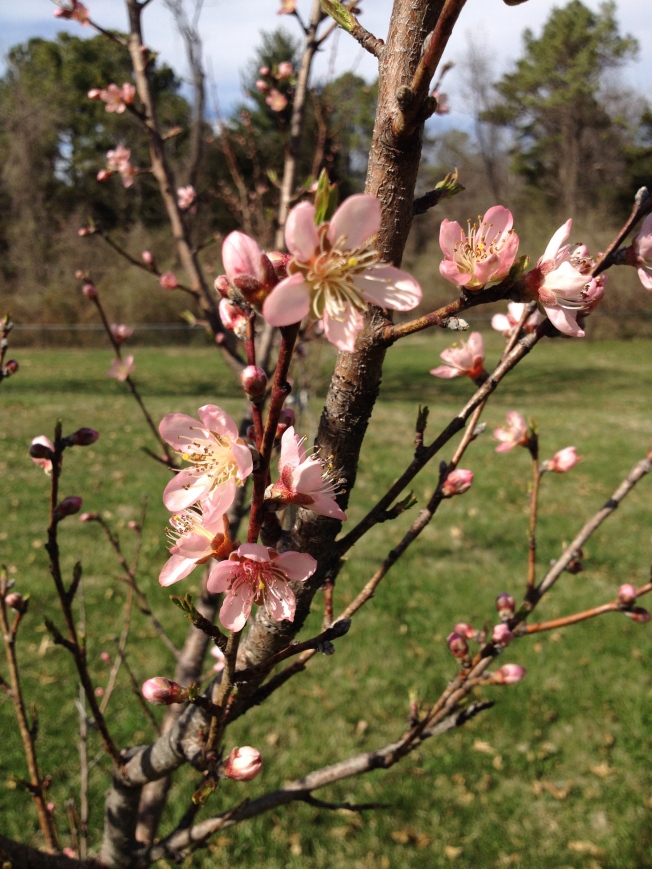 The strawberries are peaking out from their straw…. 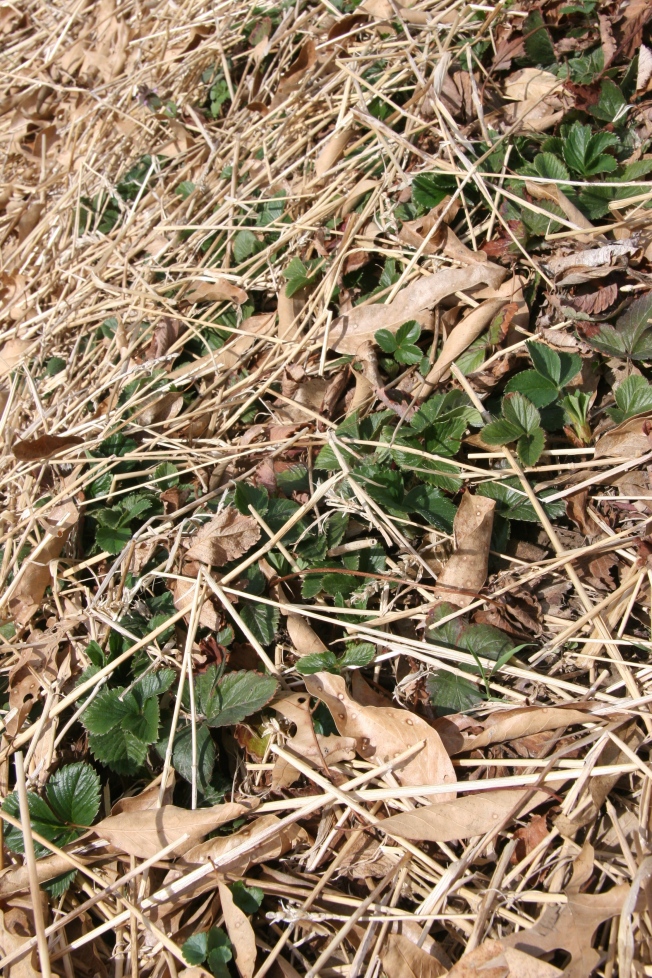 and the blueberries have impressive, swelling buds that are the promise for a healthy crop again this year…

The trees are not the only thing swelling in the Sauerhoff family!!! Kate and Jason are awaiting the arrival of Baby Ward who is due to arrive April 12th. I’ve done a bit of knitting for him since Kate wanted something special to cover his little head. Here is his hospital hat…(it says ‘Baby’ on the front and ‘Ward’ on the back) as well as a little sweater for next winter… 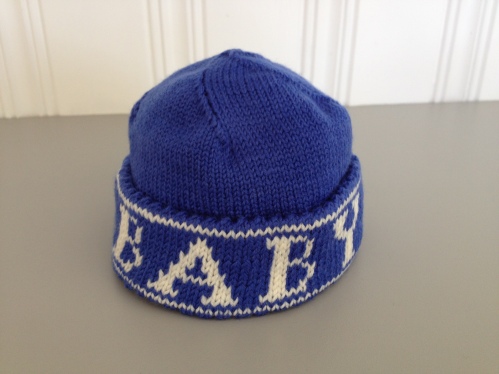 I managed to knit up another sweater for me as well, a Nordic design, that will keep me warm in the future.

Here’s hoping that the next posting from the farm will be about the newest family member and that we will finally have a name instead of the popular A. Ward appellation he has been carrying around now for months! Stay tuned!

3 thoughts on “March-ing Forward With Signs of Spring!”