We have had a very busy week here at the farm. We are in wedding count down mode…less than two weeks at this point…and even though wedding preparations are highest on our list of things to do, the farm demands never stop. We have produce to harvest, fields to maintain, trees to water and at the same time, the last of the seeds to plant. We are a little late with some of these last seeds but they germinate fast with the warmth of the ground so we are in good shape. The squashes and melons are all finally in with some germinating in a matter of days!

I had a deadline with the strawberries to meet since I had to deliver a certain quantity to the caterers to use for the wedding. I won’t share any more details at this point in time, but I met that deadline last Thursday and was thrilled to get that task accomplished.  So far, the strawberry crop YTD is at 122.5 pounds and this leads the way in the top of the 2014 harvest by weight. That record won’t last long as other weighty produce will soon catch up. We are approaching the last half of the strawberry season here and I can’t say that it makes me sad since I’m ready to move on from the stained fingers and long hours in the patch and kitchen that come along with picking and processing. So far I’ve frozen 15 one gallon ziplock bags of whole berries and last week I made strawberry leather for the first time. I gathered a bunch of recipe examples, read through all of them and decided which direction to go. Here is how I did it.
I washed, hulled and quartered 3 pounds of berries and put them in batches through the food processor for just a bit to get a nice puree of fruit. I then added a cup of sugar and cooked it on the stove until it came to a boil and then I simmered it until it thickened further. I put my silicone mats into my half sheets and poured this goo onto two of them like this.

Then I spread the mixture thinly and put both sheets into a very low oven setting to dehydrate some more. This took about 8 hours total. 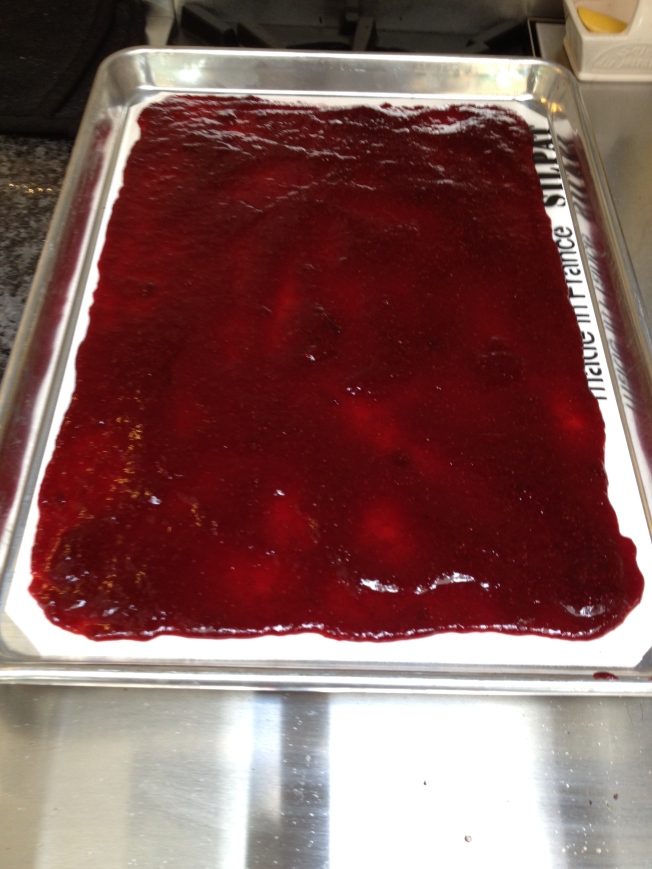 When it was sufficiently dried, I put a sheet of parchment paper on top and flipped the pans upside down and pulled away the silicone mats. Viola, fruit leather, or as today’s youth would call it, fruit roll ups! 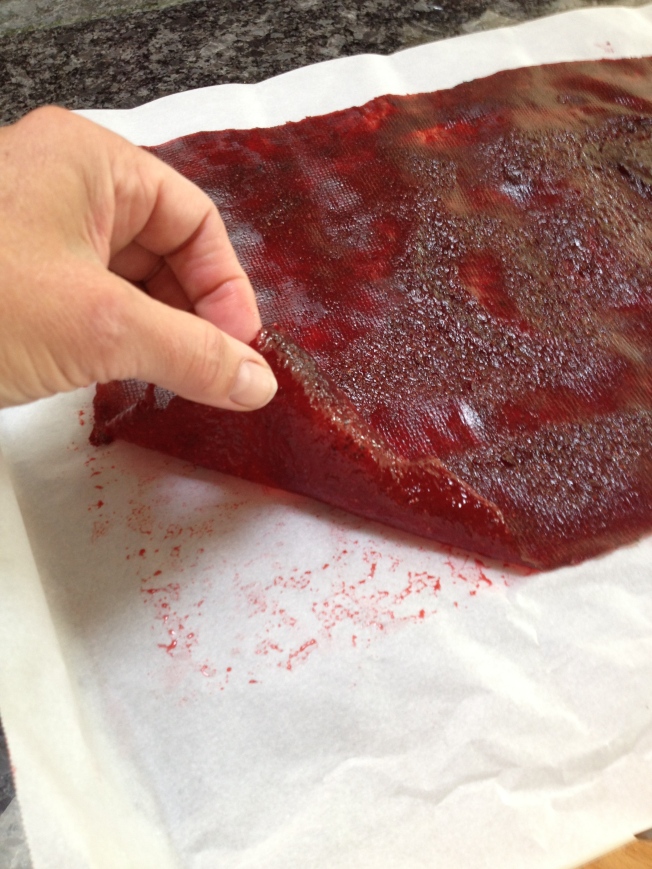 I’m not sure I’ll make this again, but when faced with lots and lots of berries, it is always good to experiment with new methods to preserve them. On the jam side of things, I tried probably six or seven “recipes” last year while making 90+ half pints of strawberry jam. I kept careful records of how each batch was made so that we could evaluate which ones we liked the best. So, it was rather easy yesterday (during a rain break) for me to use up some of the berries waiting in the refrigerator and make the first jams of 2014. Here is how I proceeded with each batch (I made three batches). I used 3.5 pounds of washed, hulled and quartered berries that I smashed into chunks with my potato masher.

Then I added pectin in the form of a brand called Sure Gel and added 1/2 a pat of butter (which is that blob you see in the photo) which helps to keep a foam from forming.
I cooked the mixture until it came to a rolling boil.

Then I added an enormous amount of sugar…5 cups…and brought the mixture back to a rolling boil again and let it boil for exactly one minute (I love my iPhone timer) and then took it off the heat and spooned off a tiny bit of the inevitable foam before ladling the hot mess into my waiting, sterilized jars. There is nothing that burns your fingers worse than boiled, sugary fruit – ouch! I quickly popped on the sterilized lids and rings and lifted the jars into the waiting hot water bath which is also boiling. I am OCD on this part since I always start adding the jars in clockwise fashion starting at 12 o’clock all the way around and then into the center. In doing so, I removed the jars in this fashion too. They are in the bath for a full 5 minutes AFTER the water returns to a boil. You can see that there is an insert in the bottom of the pot that keeps the jars from sitting on the bottom.

By the end of a long afternoon, I made 3 batches and wound up with 34 half pints and 2 quarter pints of beautiful jam! The front half pint jars are wide and squat and very cute…they came from Janet Lange as she was cleaning out her basement and thought of me. Thanks, Janet…look for some jam at your doorstep after the wedding!

We continued with other chores around the farm all week. This week it looked as if the cabbage was ready to tie up. As you can see, the leaves are forming nicely…

But they will form heads more rapidly if you tie the outer leaves to encourage this growth pattern.

Of course we have to keep up with the mowing which I enjoy because it is such good exercise when using the push mower. I feel like the pied piper when I do this since the birds all follow me around, swooping in to get the bugs that fly up behind my path. I noted all the wonderful new bird nests while mowing since you can see the mother birds returning to their nests with their goodies. We have a new robin’s nest in one of the Trident Maples and it looks like the mother is sitting on eggs. There is also a morning dove nest in the north front oak tree and the babies are very obvious when the mother is feeding them. I tried to get a photo but the nest is so obscured that it just looks like lots of leaves. And finally, my very favorite birds, the barn swallows on the front porch finally have babies in their nest. They are only a few days old and are quite hidden still unless the parents are feeding them and then you can see lovely little beaks grabbing for food. It takes some patience to photograph them at this stage since the parents like to feed them in private as if the nest is hidden. I was thrilled to get this photo this morning. Four little mouths to feed. If you look closely, the lower left corner shows another adult leaving the nest as they take turns bringing food.

We continue to harvest the leaf vegetables in great quantities and have found some great ways to use kale. Most recently, I’ve been making a version of a kale omelet. I chop the kale in my mini food processor.

Then quickly steam it on the stove top in the omelet pan. I do not have many non-stick pans but this is one of them. I use a couple of drops of water to help create the steam.

I set this aside, beat my eggs and pour into the pan to proceed like normal on a very low flame. Then when the mixture is setting up nicely I add some cheese and the kale and continue to bake some more.

A quick flip of half the eggs on top of the other half gets us a quick breakfast of proteins.

Just to note, until I get my chickens and my own eggs, we have been buying ours from a special guy named Ben Roberts who sells his eggs at a couple of stores around town. These eggs are noticeably better tasting. Here is his packaging. 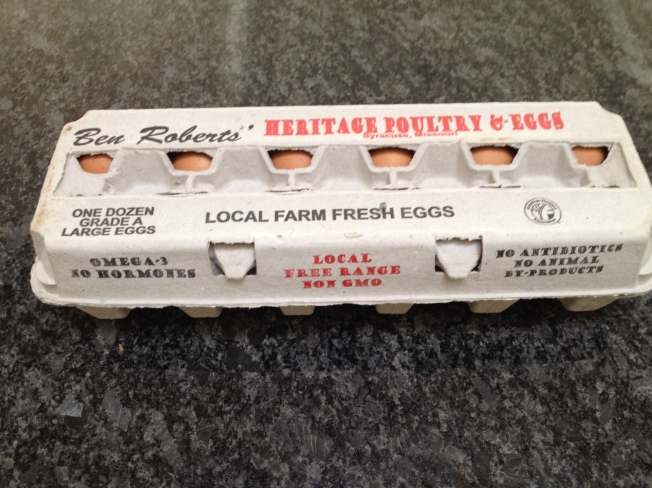 How many times do you find eggs with the guy’s phone number on the label?!?!  He delivers to twice weekly and the people who follow his deliveries scoop these up fast!

And now for the bee update: Last Thursday Jurgen decided to collect the honey supers from some of the hives. I was unable to join him since I was on strawberry duty at the time but he borrowed our truck and worked with his wife to collect 10 honey supers full of combs of honey. Today he is extracting the honey from the supers and I am off now to help. I know I will have plenty of photos and a good story about this and some other bee related info when I come back from this new adventure!

One thought on “Green Eggs and Jam”