Farley has been usurped, and I’m back at the keyboard for a bit since the rain has forced us indoors but not before lots and lots of work was accomplished this weekend. Yesterday was an extremely interesting day for me as an apprentice beekeeper but first I have some other details to share on efforts we made around the farm using some of our favorite tools, some of which we have named.

The Hori-hori knife is about as useful as any hand tool we have used for weeding. The point is sharper than most trowels and the serrated edge is extremely helpful. I think that it is more efficient to use for weeding because it is not as wide as a trowel and also not scoop shaped so it lets you get ‘down to business’ faster and easier.  Ours looks like this but many versions are available in gardening stores and catalogs now. We call it the Hari-kari, which is both the misspelling and wrong pronunciation for Hara-Kiri, the ritual Japanese form of suicide. Just try using this tool without thinking of that!

One of our next favorite tools is new to us but we are already in love with it and wish we had purchased one years ago. It is called an Action Hoe which you quickly find on line by that name but it is based on the old fashioned Dutch hoe mechanism. This makes hoeing very efficient and twice as ergonomic as a regular hoe since both sides of the blade are sharp and mounted so it swivels on both the pull and push action of your stroke which is very effective. We have not sharpened ours yet but if keeping this sharp is the only difficulty, it will still be well worth owning and using this tool. So far, we have not called it anything funny, just the action hoe. We like using it so much, we may have to get another one so that we don’t get into fights over who gets to hoe with it! If that isn’t a recommendation, I don’t know what is! It looks  like this.

We have lots of other effective tools, but this weekend in particular I was focused on grinding away at our wrought iron flower pots and re-painting them so they would look sharp for the wedding. Here are a mere half of the urns I was looking to work on.

What a daunting task! I had an old metal brush with a wooden handle that was probably my dad’s but I nearly fainted at the thought of how long it would take to clean the rust from the urns using it alone. My arms would have been rubber by the end if Dave had not suggested that I try to use his power drill with a special wire brush attached. Here is what I used instead. Brush vs. Power tool – no contest! 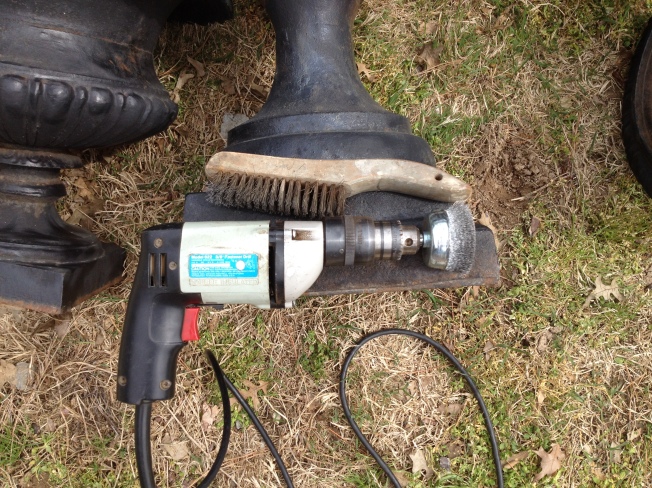 This made easier work of the task of getting these ready for fresh paint but it was still a chore since the power tool needed to be grabbed by both hands to control it and keep it on the metal surface and not my skin! Despite the fact that this has little to do with the farm or our plants, it brought to mind a concept that I was first introduced to after college when I was working as a paralegal in New York City. This was not a super challenging job but most of the law firms hired new graduates from prestigious colleges to do whatever menial tasks the lawyers didn’t want to do. Of course there was a pecking order of sorts amongst the paralegals and as the new person on the job, I started out being assigned some of the most basic and boring assignments. I endeavored to complete all the tasks that came my way with swift and thorough precision so it didn’t take long for my boss, Bernadette, (a brassy New Yorker and the head paralegal) to take me aside and explain the error of my ways. She basically told me that the wise way to approach menial tasks was to do them poorly. In other words, if I didn’t want to be assigned to that task again, I shouldn’t excel at doing it. Hmmm. This was the first time I had been introduced to this concept. I don’t think I ever quite subscribed to it, but must admit it was hilarious to hear my co-workers from Harvard, Yale and Princeton saying things like “no, I can’t file those ’cause I can’t alphabetize” or spell or type or whatever it was that they just didn’t want to do. Anyway, I was reminded of that concept yesterday when I was cleaning the rusty urns and realized I still don’t like the theory. I get a good amount a satisfaction from getting things done under my own steam. After a morning of wire whisking with the drill, I spent an afternoon painting and all the urns are now beautifully ready for their new plants. Pics to come.

Okay, ready for the bee keeping update? Jurgen came by yesterday to check on the queens that we had liberated about 10 days before so I jumped up from my paint brush and donned my bee veil and joined the examination. We were looking to find either the queen herself or evidence of her presence (egg laying) in both hives. (Only one queen per hive.) We opened hive #10 first and Jurgen used what must be one of his favorite tools called a hive tool. It looks like this and has functions on both ends plus more.

It is handy because bees ‘make’ – they actually collect resins and saps and add another ingredient from their bodies – a substance called propolis which is a sticky, gum-like material that bees use to seal cracks in the hive and even to help “winterize” the hive. Beekeepers have to pry the hive boxes open at times and then frames apart from each other since the bees are using this material in lots of places in the hive. Here is Jurgen using his hive tool to separate the frames.

And also to clean some of the unneeded comb structure from the bottom/sides of the frames.

Here are the the frames that Jurgen pulled from the hive to examine. 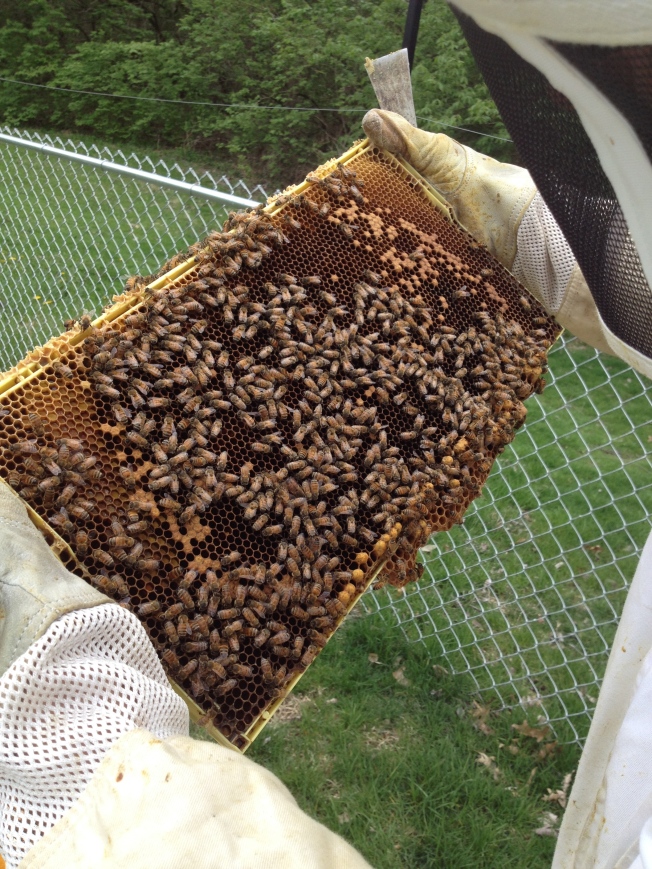 Yeah, lots of active bees, but he was really disappointed that he did not find evidence of newly laid eggs in the first hive he opened. We examined each active frame carefully, looking for the queen. She is quite distinctive from the other bees since her abdomen is longer and not hairy nor striped like the other bees. Here is what we were looking for. See her in the middle?

So, it seemed the queen we had introduced into the first hive was no longer there. Bummer. After thoroughly searching but not finding her, Jurgen temporarily closed the that hive and opened hive #11 and found good news. There were newly laid eggs present which meant that the queen had been hard at work, serving her roll in the hive and the chief egg layer. Can you see the bright yellow pollen still on the legs of one of the bees? He has just arrived from collecting and hasn’t ‘delivered’ it yet.

A visual search for her also was positive which was really good news since our queens are un-marked and the only way to spot her is with keen eyes. I think Jurgen would agree that this time, I actually spotted her first which was a very proud moment.  So Jurgen pulled out a queen isolating or secluding mechanism from his jacket and promptly scooped her inside this small cage like structure with a couple of other bees as well so as to keep her captive for the next step.  Here is what that looked like.

It was then that Jurgen explained his plan to me. With the queen temporarily excluded from the second hive, he was able to lift out some of the frames from the queen-less (and therefore egg-less) first hive and replace them with frames from the second hive that had eggs already present. We just swapped some frames and gave the first hive a fighting chance at having their own new queen. 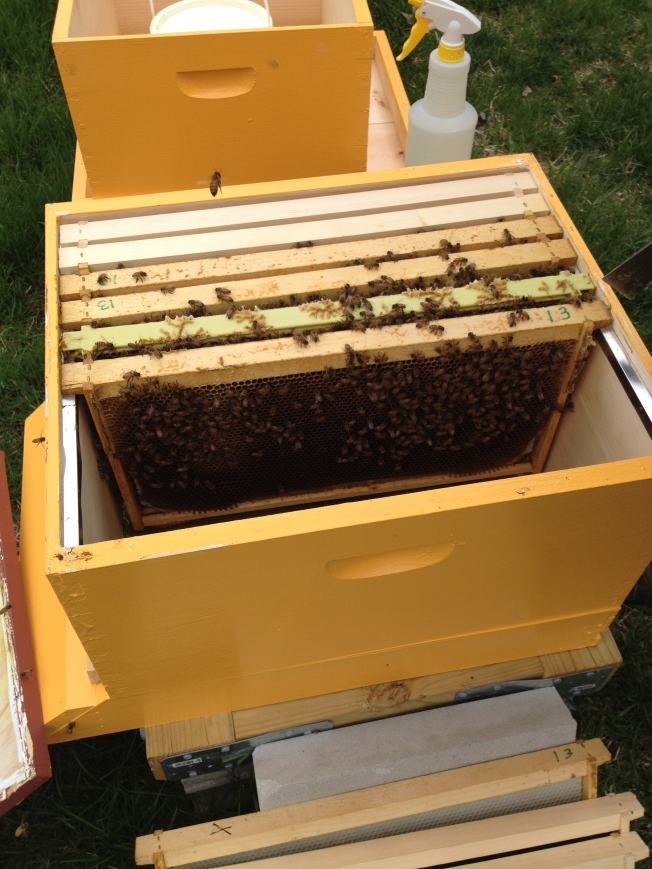 Apparently, if a hive is queenless but has eggs between 1-3 days old available to them, they will adopt the eggs and make their own queen from one of them. If the queen starts to get too old to be an effective egg layer, the hive will also decide to get a new queen this way. I had to go to my text book and read all about this but apparently the bees start to treat one of the eggs with special care (only if it is between 1-3 days old, not more) and create a queen cup or specialized cell for housing the growing queen and eventually feed the larvae in this cell the royal jelly which is the special queen food. All of this is very complicated, but in the end, after 16 days, we may have a new queen which is how long it takes for a new queen to emerge. We will check next week for the presence of the queen cup and I will up date the progress. This was a very exciting episode of bee keeping due to the need to re-queen one of our hives (it is also one of the reasons it is good to have two hives) which was made all the better since Kate taught me how to take pictures with my iPhone while wearing gloves. In camera mode, you can use the volume control on the side as the picture taking button. Go out and learn something everyday! 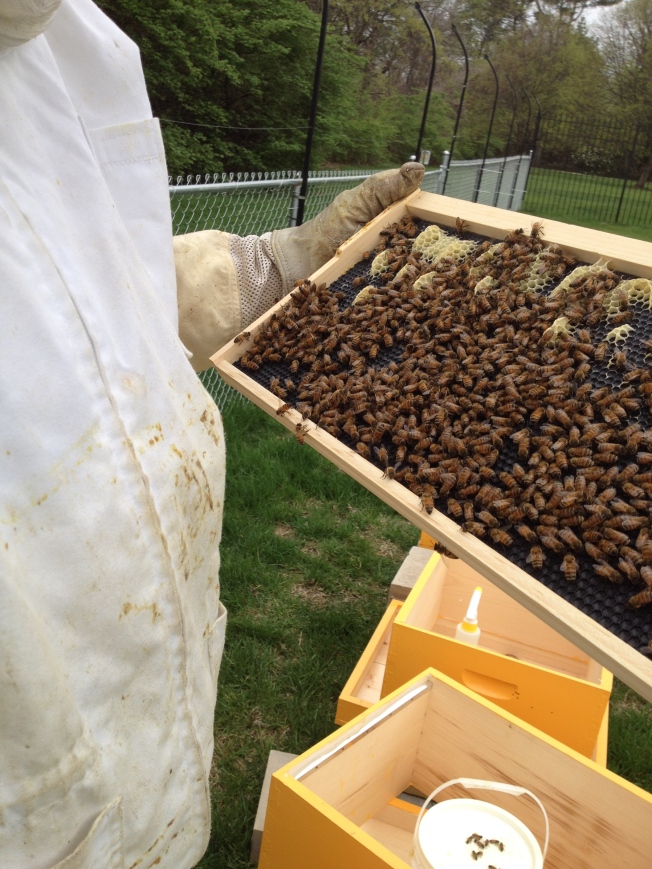