Our weather has finally turned spring-like but because the season was so delayed, we are feeling as if we are playing catch up before we even started the growing season.  The good news is that hardly any trees or plants jumped the gun and bloomed too early only to be caught with a frost. That happens often enough in our growing zone but so far, it looks like we may have seen our last frost. Since I last posted, we had torrential rain (along with nearby tornadoes) which brought more than 4 inches of precipitation (including marbles of hail) in a short span of time. We were glad our fields were plowed and tilled but the rain meant we had to wait to do any vegetable planting. So, we occupied ourselves with other chores and found plenty to do. We finished pruning all of the roses and hope a late spring will mean they will be blooming wildly for the June wedding! In addition to pruning and feeding the roses, I found time last week to pick the stones out of the beds which had been left behind by the driveway guys!

Dave built the twin compost set that we ordered last winter and we quickly set it in place at the end of the driveway. We see this as accommodating much of the “green” waste from picking and processing our fruits and veggies in the spring/summer and our “brown” waste in the summer/fall as the plants die back, dry up and get shredded before being added to the mix. Of course we will contribute our daily coffee grounds and a few other things not from our fields but we hope to produce a wonderful compost to use in the future. 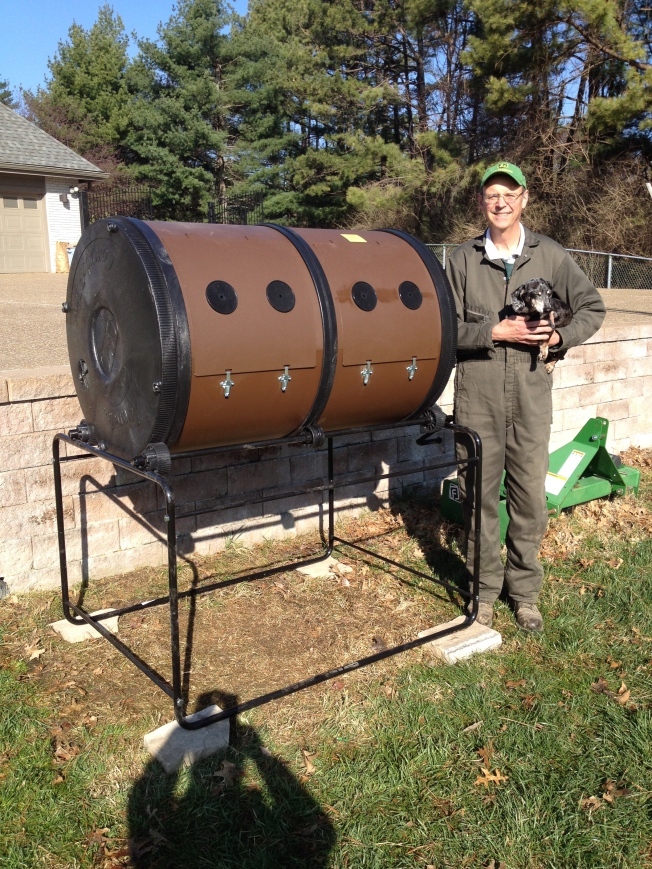 On April 1st, Dave also made the trip to Stark Brothers Nursery in Louisiana, Missouri, something that we have been doing every spring now for the last four years. You can find the retail catalog on line at starkbros.com  but the commercial listings we use for buying are fascinating since they include all of the root stock details as well as other information about each hybridized variety of plant or tree.

The purpose of the trip was to pick up some replacement and additional trees – peach and nectarine – for our orchard. We look forward to this hour plus drive through the Missouri countryside at which time we see the local farmers plowing their fields and getting ready to plant. This year, Dave had time to look around in the cave like facility where Stark stores many of the young plants. He also saw a truck being loaded with 1200 bare root apple trees that was headed to Washington State, at least two thousand miles away, where apples are king! It is fun to think that some orchard-ist in Washington has chosen the same place that we did to buy fruit trees!

He loaded his pick up with young trees and covered them with a tarp for the ride home.

As we add them to the rest of the orchard, we see evidence that all the trees are transitioning from budding to blooming but this varies significantly even among the same varieties. 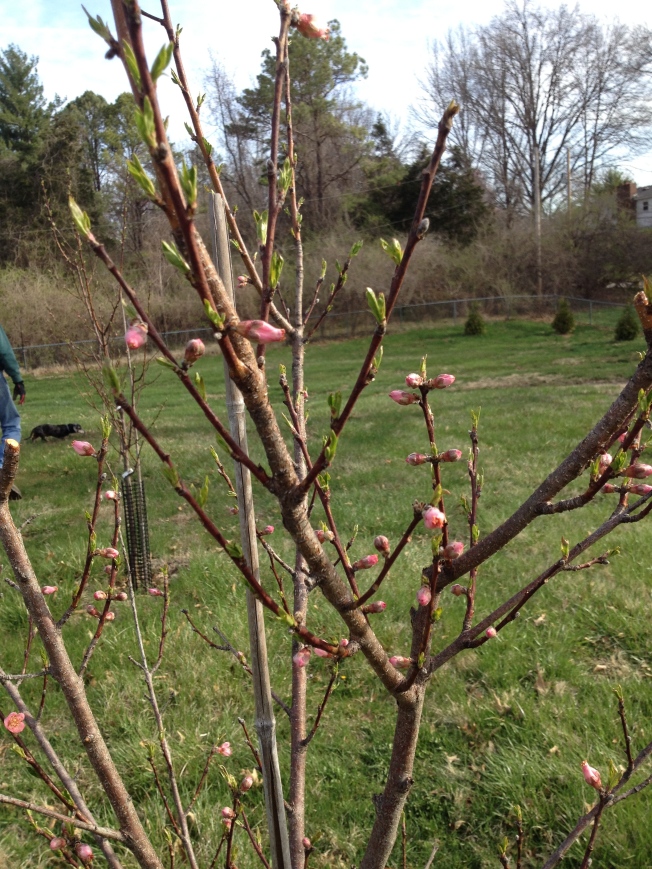 While it was still too wet to work in our fields, I kept busy getting the blueberries ready for their annual mulching and dosage of sulpher. They look wonderfully productive at this point. As soon as I get done cleaning them up and minimally pruning, we will once again apply the bird netting in case any deer find their tender buds too irresistible and attempt to munch on them.

We have now had a couple of days of sunshine and the soil has both dried up a bit as well as warmed enough to do some planting. This was not a year to follow the traditions of planting potatoes on St. Patrick’s Day since I’m afraid the wet, cold soil would most likely have rotted the potato starts by now. Instead, we are (as we were last year) about 3 weeks behind but it was ideal today after having prepared the potatoes in advance. First, we bought the Yukon Gold and Pontiac Red tubers from Valley Park Grain Elevators, and cut them into pieces that included at least two ‘eyes’ and left them to dry or ‘heal’ for a day.

Then, we sprinkled them with agricultural sulpher which will help protect them from fungal disease and hopefully ward off potato beetles while in the ground.

We did a bit of last minute prep of the rows since the soil was finally workable again. 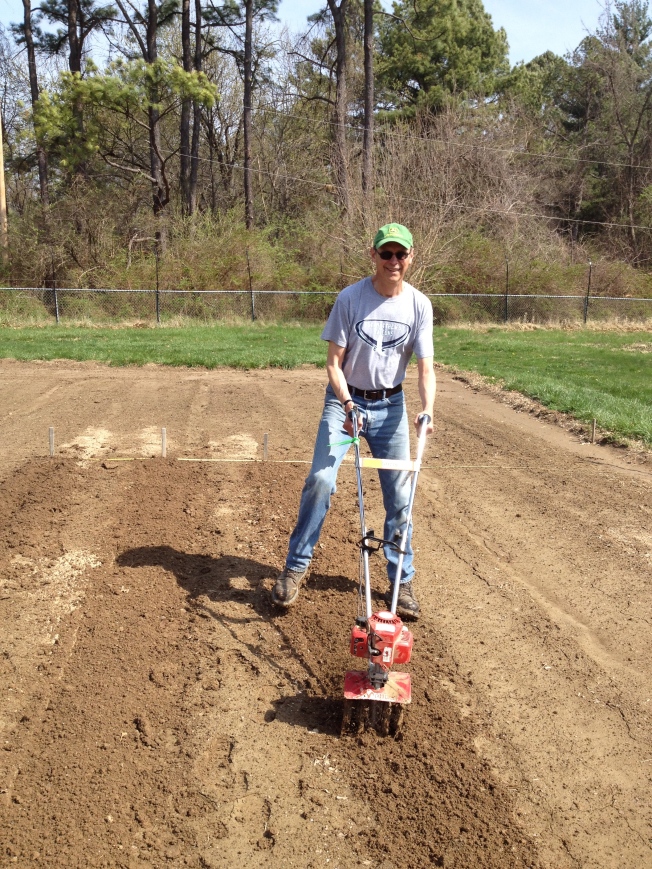 This year we planted seven, 22 foot long, rows or approximately 145 potato starts. Some books say you can get as much as 10lbs of potatoes per plant, so I would say it is safe to expect we will harvest well over three hundred pounds from the crop this year. Here are the starts in place before we covered them up with soil. 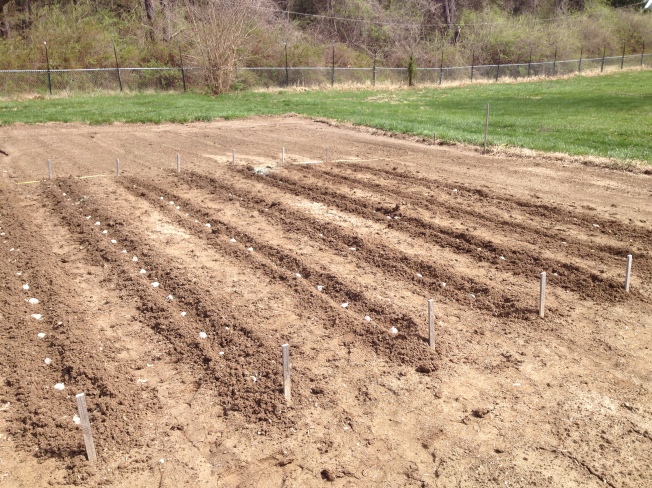 Today was also a good day to plant the peas which are really good ‘companions’ to the potatoes so they went into the next rows. For these, we actually took at temperature reading with our new instant read thermometer. I usually use this for cooking, but why not stick the probe into the soil to get a good temperature reading? Everyone says you can plant peas very early and that is true, but if you plant them in 40 degree soil they will take 30-40 days to germinate whereas if you plant them in 60 degree soil, they will germinate in about 10 days. So, my thermometer readings today ranged from 63-67 degrees at about 6 inches below the surface. Perfect for peas! We planted two double rows of Easy Peasy seeds which are a self supporting variety from Burbee. Here is my Thermapen with an indication of the ambient temperature this afternoon.

We also planted two rows of one of our varieties of green beans today and will continue to plant these in spurts throughout the summer so as not to be overwhelmed with too many tasty green beans at once.

So now for the biggest and best news of all…the bees finally arrived yesterday! Last Sunday our bee mentor, Jurgen, arrived and put the empty hives in place. We knew he was going to ‘split’ his hives and buy additional queens for the new hives located here as soon as the weather and the bees were ready. I provisioned with gloves and a specialty veiled jacket as well as a couple of other handy items. If you look closely, you can see one of the hives thru my veil screening. Farley is not sure what is going on but is happy to pose for any camera.

So Jurgen arrived yesterday with the bees in transport boxes in the trunk of his car along with a smoker to keep them calm. He quickly loaded them into our utility cart and off we went to introduce them to their new homes. 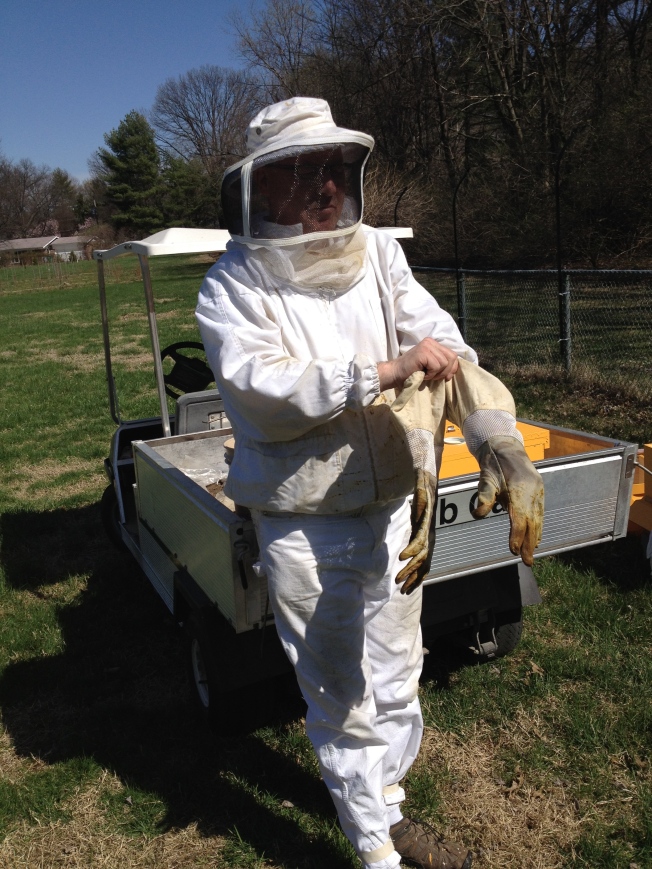 He opened up the new, awaiting brood chambers or deep supers, which had 4 or 5 new, empty frames inside. He brought with him about 4-5 additional frames with established bees from one of his other hives and popped these into the waiting boxes next to the empty frames. The bees will start to expand into these new frames as soon as they feel at home and when these are filled (10 frames per box) we will add another box on top to fill with more frames of bees.

It was an amazing experience to have the bees flying about just outside of my protective gear. I think I passed the first test of being calm and not feeling any fear. The worst part of the experience is that my gloves prevent me from taking photos on my phone! After he got the bees all settled and the boxes re-assembled, Jurgen left but came back later that day with the queen, her attendants and some food for all. The queens are in little screened cages with just a couple of attendant bees who actually feed her! Isn’t that the life! Here is what they looked like. The white part is where the food is located. 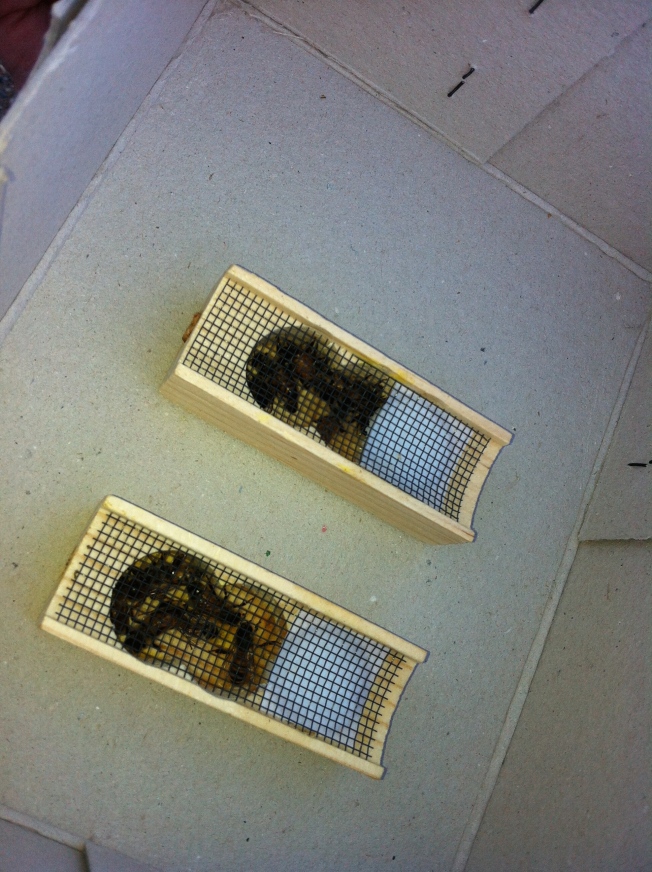 Then, Jurgen re-opened the hives and placed one queen container into each hive between two frames but didn’t let her loose since the bees need to become accustomed to her first. He will come back in a few days to evaluate if they have accepted her and I will give more details about that interesting aspect of bee watching then. In the meantime, he also fed the bees by putting some sugar solution (along with some more ingredients) into the upper super. Here is what the hives look like in place. We got up early this morning to investigate, but bees are late sleepers so they were not really out and about until around 7am.

As we all get accustomed to the presence of the bees, I decided to warn the neighbors with some signage…like the bright yellow hive boxes aren’t telling enough????

This is such an active time of year for us that we are exhausted before the sun goes down. I can think of at least a dozen other things that we have been working on lately but perhaps I’ll have time to write about them tomorrow…especially if it rains as predicted! Stay tuned!

One thought on “A Hive of Activity Keeps Us Bizzy!”