What a wonderful week we had here at the farm! Kate and Jason came in from California to visit and we managed to keep quite busy with wedding planning activities. We all felt as if we got a lot accomplished and with plenty of laughs along the way. Besides bustling about with wedding planning, the farm had some other visitors as well.

First, we had a sighting of the hobbled deer that I mentioned in the previous post. As you may have noticed by now, we are keen on watching for activity out the back glass and so it was that I spotted a young buck on the north fence alleyway last Monday. He was munching away at honeysuckle and I grabbed my camera and slipped out the back door to observe him, wanting to see if he would challenge the fence or not. He spotted me, stopped eating and looked around to figure out his options. I thought he would dash off along the fence but he hobbled into the woods instead. I managed to get a quick pic but I couldn’t discern any visible damage to his leg other than his odd gait. So here is my crippled deer. I guess I should call animal control? They might just think I’m interested in having one less deer. Well….. 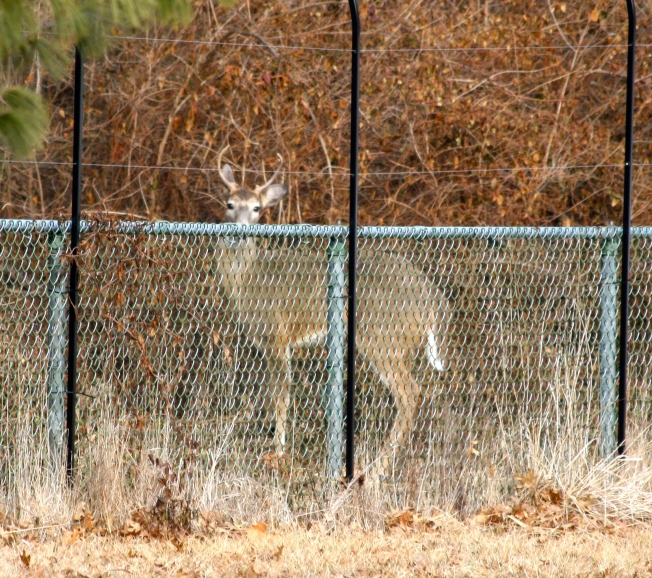 Our fence guys also arrived this week to install the new cyclone sections and gates. We were a bit surprised to see them since it was about the first day the temps had been above freezing and we were not sure how difficult it would be to dig the new posts since we had heard that the permafrost was solid for 12-14 inches below the surface – the most it has been for many years. They managed okay since they had an auger and the posts went in quickly. They returned the next day to pull the fencing and add the gates. Next up: adding deer fence pickets and wire to the new fencing. 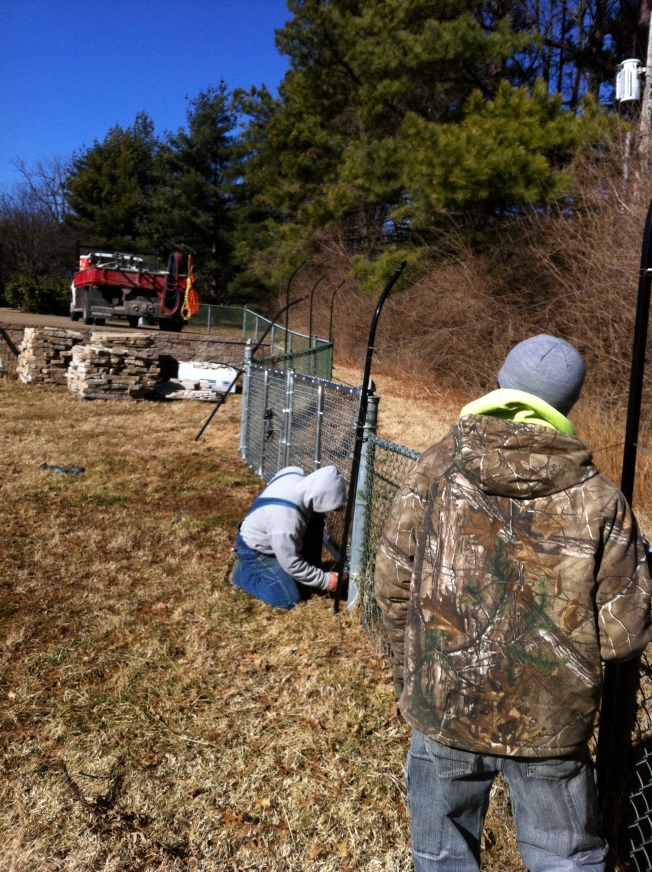 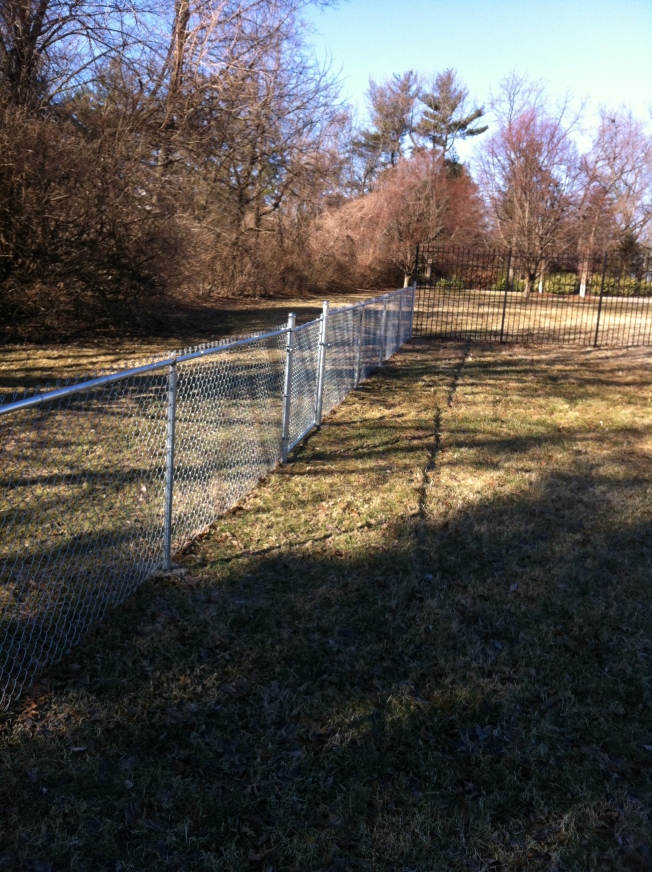 We had decent weather until Thursday afternoon when a terrific storm kicked in with high winds and brief, but torrential rain. The wind was blowing at more than 50 miles per hour and got so bad that at one point we looked out the window and saw one of our wrought iron benches had BLOWN right over! 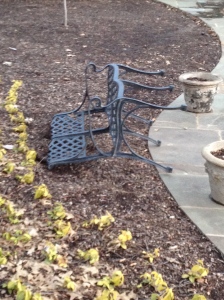 We lost power for about 5 hours that afternoon which would not have been so bad except that I had planned to have the family all over for dinner that night. It was fortunate that just about everything I had planned for dinner could be put off for another night. Our natural gas generator kicked in immediately so we did not suffer much except that the kitchen lights were somehow taken off of the generator panel at some point along the way so while we were watching TV in one room, we were using flashlights to cook by in the kitchen. As you can see, I was a bit perplexed by this as I prepared a little picnic dinner that night. 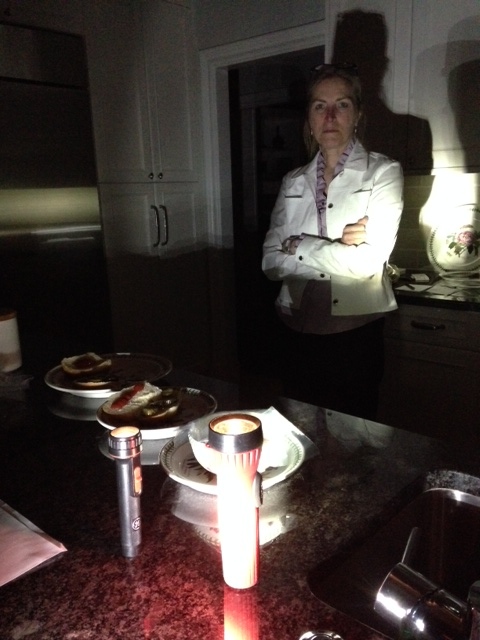 Power was restored to the farm around 8pm but we heard the next day that the rest of our neighbors did not get power back until the following morning. The electricians are now scheduled to come next week to re-align the circuits that are fed by the generator! By Friday things were back to normal and we had everyone over for a lovely dinner here.

Saturday was so full of delights that it seemed like Christmas morning! The sun was shining clearly and the air temperature responded appropriately and so by early afternoon it was 62 degrees! Despite having to part with Kate and Jason who were flying back to California, we had another very welcome visitor to the farm. Our aborist, Jon, called early in the morning to see if he should drive in from Illinois for the annual orchard pruning day. What fabulous news! Yes, yes, we shouted, we would make a day of it! Although we planted the orchard four years ago, this was only our second year to thoroughly pruning all of the trees.

So we spent the morning and early afternoon and with Jon’s help, we evaluated each tree and pruned it appropriately. (Dave keeps a detailed spread sheet which shows each tree position, its name, root stock, bloom time and measurements – both height and caliper as well as how we have rated them over time.) There is so much to learn on this subject since each type of our trees (apple, peach, nectarine, pear, cherry) calls for a different pruning technique. Last year we went through this educational exercise with Jon but each year also calls for a different type of pruning as well so we had different considerations this year from last. It was fabulous to review each tree with him since we could easily identify the cuts we made last year and see the response in terms of growth that happened since then. Although we see these trees all the time when we are out in the field, it is so interesting to look at them through Jon’s eyes and to better understand the full growth/maturity plan as we worked with him. Of course we had our alcohol cleansed clippers at the ready and will continue to keep them clean and sharp for any intermediate cuts that need to be made before next year. 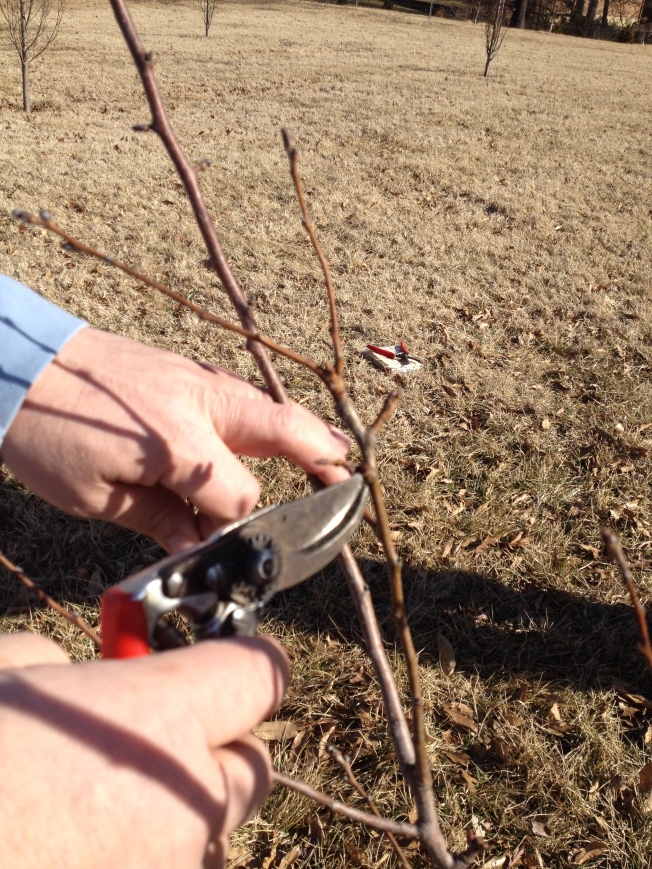 So despite reading the pomology (study of fruit trees) text books on pruning techniques, I must say, there is nothing like being in the field with someone who knows what they are doing and is willing to demonstrate how it is done but most importantly, be able to answer all of our questions. Jon is a great instructor and we are pleased to have his input. The other reason I feel like our pruning day was like Christmas, is because most of what we do here demands our near constant or continual efforts and much of it can be really hard work. This type of pruning happens once a year and is done in less than a day without without us expending too much effort but we see the payback from it all year long!

Winter evenings are also perfect for knitting. I started this sweater in early January and after completing it last night, I promptly put it on to wear today. As soon as the weather changes there will be little time to knit but that is the beauty of having more than one season, right!?!? 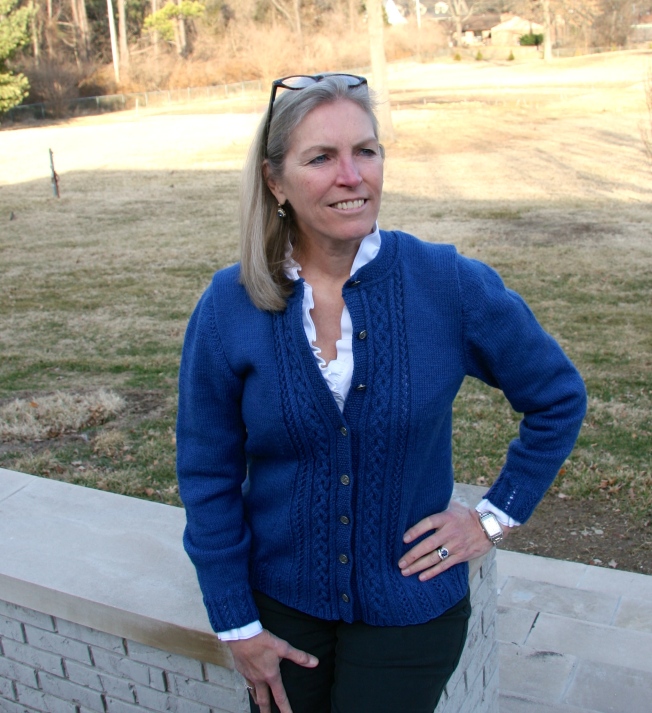