We are delighted to have been given another cookbook by a Seven Oaks fan! This one,  The New Midwestern Table by Amy Thielen, is hot off the presses and features recipes from the heartland. The author hales from the ‘upper’ Midwest, near the mouth waters of the Mississippi in Minnesota.

She has cooked her way from there thru the best restaurants in NYC and back and has produced a glorious book with recipes from her cooking heritage. Most all of the recipes include some history and stories of her connection to those foods. Although there are many tempting recipes to try, (200 in all) we recently tried one due to having the ingredients near at hand.

She plainly calls this: Turnips with Their Greens and Bacon. Well, what can go wrong as long as there is bacon in the mix? My attraction to this recipe was that it used the turnip greens as well as the root. Viola, turnips with their greens!

As instructed, I cooked the chopped bacon slices in a pan until crisp and the fat is rendered. Then discarded most of the bacon fat and kept only 1 TBSP. She says to add butter and sautee the one inch diced turnip root in the fats. This I did, but next time will not add the extra butter. I also did not peel my turnips since they have very thin skins, unlike the ones you get in the supermarket.

So I added the S&P to the pan and cooked the turnips covered as described for approximately 15 minutes on low heat.

I then added the turnip greens, (minus any thick stalks) and then the bacon and cooked until it was all glazed and the greens were wilted. 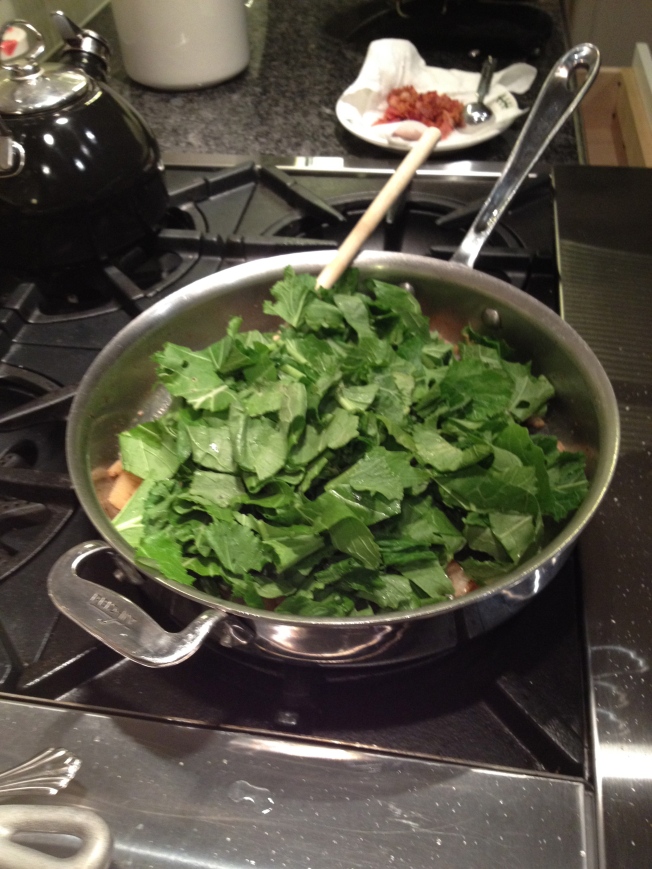 She added a bit of maple syrup to the mix but I did not do this since my turnips were not bitter and I do not like sweets in my veggies. We loved this dish, but how can you go wrong with bacon?

I served this with a turkey breast I had in the oven as well as our home grown Yukon Gold potatoes (along with more turnips) that I had roasting in the oven while the rest of this was cooking. 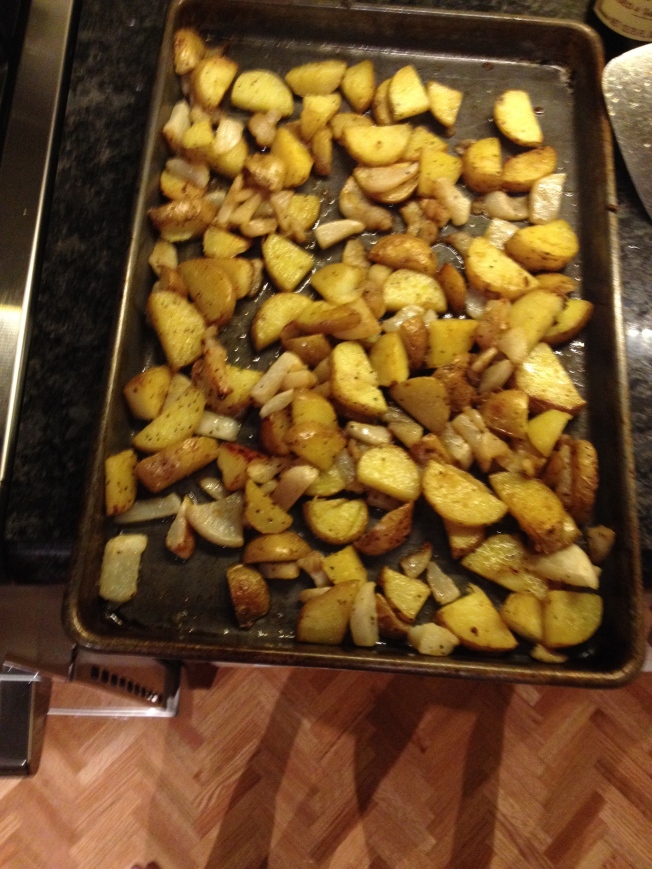 In other news, the deer are on the move this time of year. Ugh! We saw a large buck in the front of the property this afternoon and I raced out but did not get any pics since he trotted away quickly. We then saw another one in the neighbor’s yard a bit later in the day. Then Dave came in and told me that our Deer Fence had been compromised in back at a critical junction….a corner. So it involved quite a bit of work to get that back up and functional. We are not aware of any damage to our trees but can definitely see the tracks all around. While taking a ride about in the golf cart, we also saw a red fox scurry off to the north of the property so it seems this is a very active time for critters.

Even though we had a drizzly week last week, we did not get that much total rain. I think our gauge totals were less than an inch for all of the days it rained, even tho we had quite the down pour with hail and high winds last Sunday.

Today’s high was in the low 30s and we got a lot of  work done but are chilled to the bone even with hats, gloves and heavy sweaters and coats. Dave resumed working on the last scab of overgrowth at the rear of the property that is at the base of one of our large oaks. It beat him this time last year with poison ivy and sore muscles but he is determined to win the battle this year and we will keep you posted on the final outcome. When Dave wasn’t working on eliminating the scab, he helped Jon who arrived with the stump grinder early this morning. 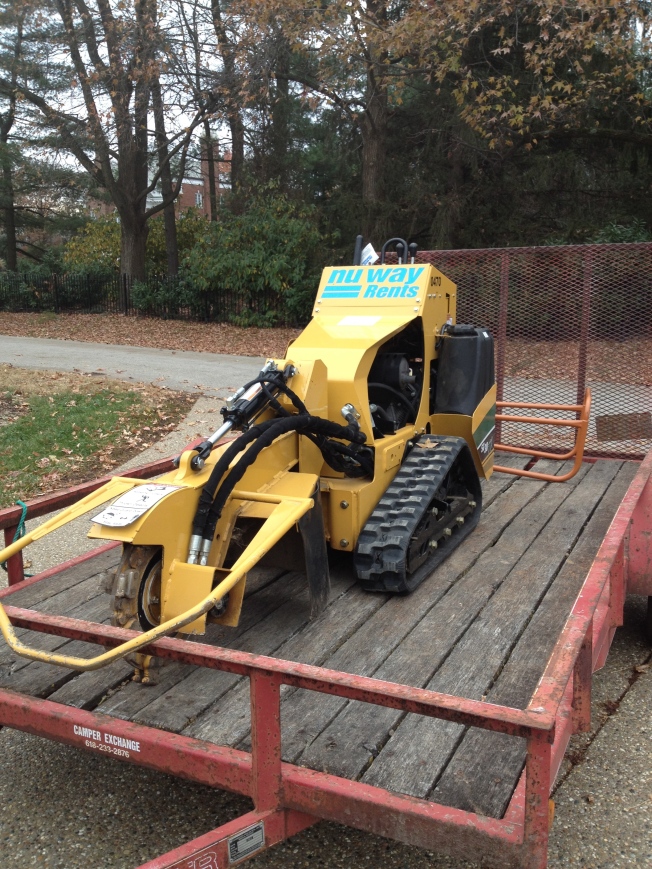 Jon went to work to on grinding the stumps out.

He made enough progress on the grinding and digging, that he was able to make two trips to the nursery and picked up 4 trees in each haul.

They were so heavy and the root balls so large that he and Dave had a mighty fight to get them off the trailer. Jon said that one cubic yard of dirt weighs approximately 2,000 lbs. With the size of these root balls, Jon estimates each tree weighs at least 1,000 lbs! So Jon and Dave used every method available to them to manipulate them off of the trailer, into the ball cart and into place. 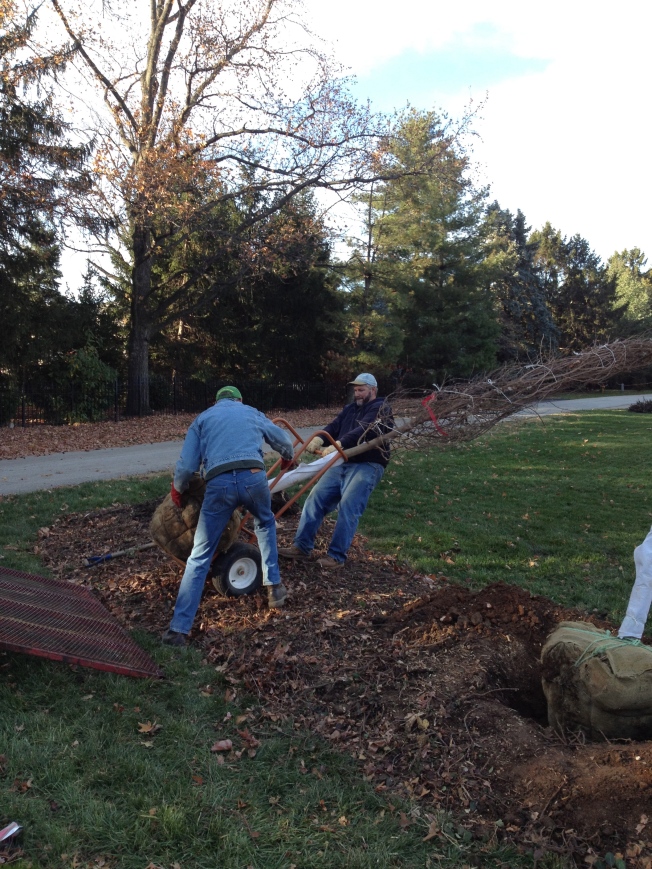 Here is what the first ones look like perched in their holes. They will be adjusted for position and actually planted when Jon returns tomorrow to continue wrestling with the rest of them!