I got home last night from Indianapolis (where I was attending my first TKGA knitting conference) to find that Dave had a refrigerator full of produce (with the exception of the tomato harvest which he had plenty of but also which should never be refrigerated!) that he had harvested while I was away. We have been anticipating that the harvesting would get serious and it finally has started to come in!

Dave was ready to cook up a wonderful dinner for me when I got home but despite being tired from knitting all week (huh, tired from sitting and knitting?), I jumped in and contributed with my end of the cooking chores. Dave grilled some chicken breasts on the Big Green Egg, while I had garden goodies cooking on the stove top…green beans, summer squash, and Yukon Gold potatoes with basil from our herb garden as an accent. Yum!

Although we are finally in the throes of summer – with the typical heat and watering demands – at least there are results which now show up in the amount of produce we are pulling in. For instance, Dave picked over 12 pounds of pickling cucumbers in the three days (among other items) while I was away and I am determined to keep up with the volume and make plenty of pickles this year. I thought I had made an over abundance of them last year but I guess we eat a lot of pickles since we seemed to have plowed thru them!

Last year I made three types of pickles: sweet cucumber, sweet zucchini and kosher dills plus lots of sweet pickle relish which was made using cucumbers. This year we knew to plant the type of cucumbers that are preferred for their pickling qualities so we selected the ‘Burpee Pickler’ for this purpose. They are described as “black-spined, medium green, warted fruits” that mature at 3-4 inches. We also planted the Burpee Supremo Hybrid (which have a similar size for pickling) as well as the Burpee Bush Champion which are larger and would be used more for slicing on salads.

This morning I made two batches of sweet pickles using 4 pounds in each batch. Here is what one, 4 pound batch looked like before slicing.

My only complaint in the processing is that cucumbers have tiny little spines on them that can be embed themselves like a splinter in your hand or fingers if you are not careful. Ugh, I got pricked by one this morning. The cost of doing business with cucumbers, I guess. Here they are all sliced up.

I decided to try a new recipe called ‘Sweet Pickle Chips’ from a book I got for Christmas entitled “Putting Food By”.  This recipe has a very simple and quick brining process on the stove top. I cooked the slices in a brine, which was made up of vinegar, pickling salt, sugar and mustard seeds, until they had turned from bright green to a dull green and drained them.

Then I ‘hot packed’ the sliced pickles into their sterilized pints and then topped with a hot syrup that I had simmering on the stove top.

The syrup was made with sugar, vinegar, whole allspice and celery seed. I then capped the the jars and popped them into a boiling water bath for 5 minutes.

Viola…pickles! I think I cooked the first batch of syrup a little too long but the second batch was just right. I used an entirely different sweet pickle recipe last year and will employ that one tomorrow so I’ll be able to get a good comparison when the eating period begins!

In addition to the fun of making pickles, when I arrived home, the package I had ordered was waiting for me. It may seem crazy, but I now order Coleman’s Dry Mustard in volume which is a great price advantage since I can get 3, one pound containers for not a whole lot more than what it would cost to get 3 four ounce containers that one can buy at the grocery! Since I need to make mustard again, look for that process in the next post! Call me a girl of German heritage when vinegar is a common ingredient in almost everything I make!

BTW, I popped up unexpectedly on the blog of a well known yarn producer recently. Here is the link: 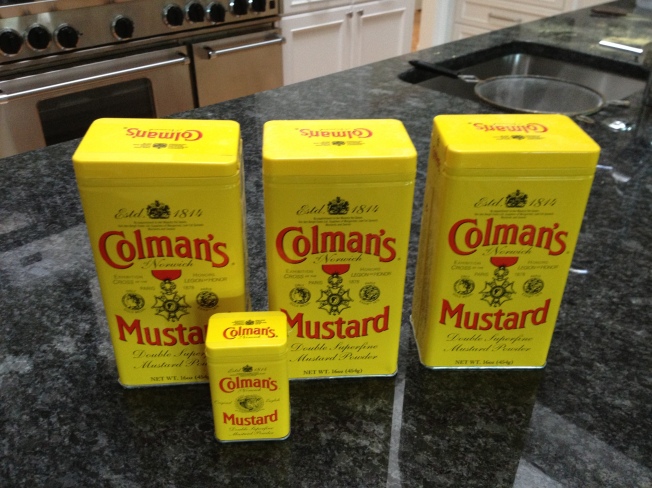